Amanda Kloots and Elaine Welteroth are joining CBS’ "The Talk" as new co-hosts. Kloots and Welteroth, who recently appeared as guest co-hosts on multiple episodes in October and November, have landed permanent spots alongside Sharon Osbourne, Sheryl Underwood and Carrie Ann Inaba. The Daytime Emmy-winning talker, which launched its 11th season in September, announced the news today live on-air.

Kloots and Welteroth, who will officially join the panel on January 4, replace Marie Osmond, who left the show last season, and Eve, who announced last month she is departing this month after three seasons.

“Amanda and Elaine are accomplished and relatable women, whose talents and personality stood out during their multiple guest appearances this fall. They bring a fresh new dimension to the show and we’re very excited to have them join the panel,” said Kelly Kahl, President, CBS Entertainment. “These five hosts together present a compelling mix of personalities and opinions that will continue to elevate the series and lead The Talk well into the future.”

“As we move into the new year, Kristin and I are thrilled to welcome Amanda and Elaine as permanent hosts. They both have amazing energy, interesting points of view and a willingness to share their personal life experiences that complement the voices of our other phenomenal women,” said Gray. “Their diverse backgrounds and bright personalities bring an authentic chemistry to the panel. Heather and I, along with Sharon, Sheryl and Carrie Ann, are excited to have these dynamic, intelligent and fearless women connect with our audience and become part of The Talk family,” added Matthews. 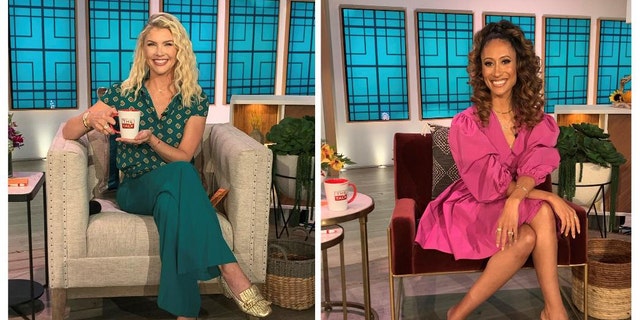 “I am thrilled and honored to join this incredible cast and crew. From the very first time I guest co-hosted on 'The Talk,' I knew I was among a very special group of people. I look forward to starting off the new year with honest and thought-provoking discussions, mixed with plenty of fun and laughter too,” said Kloots.

Welteroth is the New York Times bestselling author of "More Than Enough: Claiming Space for Who You Are No Matter What They Say." She is an award-winning journalist, producer and judge on Project Runway. In 2016, Welteroth became editor-in-chief of Teen Vogue, and the youngest Condé Nast editor in its 107-year history, as well as the second African American person to hold the title of editor-in-chief at the company. Previously, she held senior roles at Glamour and Ebony Magazine, and in 2012 became Conde Nast’s first-ever African American Beauty Director.

“I am beyond excited and grateful for the opportunity to join the phenomenal women of 'The Talk.' They have each made me feel right at home alongside them on this incredible platform that cultivates connection, kindness and understanding when we all need it most. I look forward to learning from them and lending my perspective to conversations that build bridges in this singular time in our world,” added Welteroth.