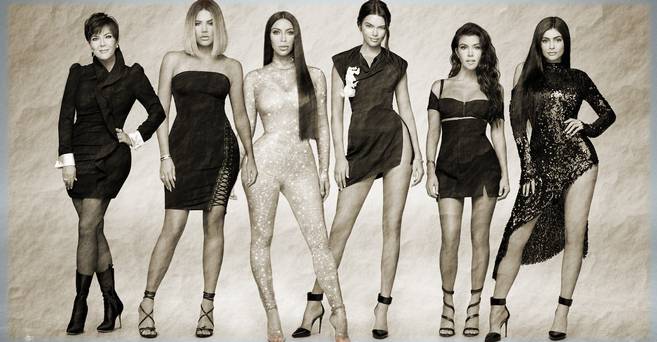 Times, they are a changin’ – but the Kardashians, they remain the same.

It’s easy to blame the Kardashians for a multitude of our modern sins: social media addiction, normalisation of cosmetic surgery and perhaps, most offensively, a growth in naming children after cities; but, when it comes to ‘America’s first tv family’, we will forever be victims of our own making.

My love-hate relationship with them is well-documented, both on this website and in person with patient friends and colleagues. I remain steadfastly in awe of Kris Jenner’s ability to have turned an already wealthy family into a pop culture phenomenon; an empire which is built on the blurring of personal boundaries with storylines for a TV show. It is the mark of a modern genius. But it’s this very purposely grey crossover promotion between reality/reality tv/Insta stories and YouTube tutorials, that makes me dubious about the motives behind their insistence at teaming up with detox tea brand Flat Tummy Co, which, according to its website, promises to “cleanse and debloat or cut the cals”.

In the last number of months, Kourtney, Khloe and Kim have promoted the same brand of tea, meaning that they either have shares in the company or were signed as part of a three-person deal to maximise profits; this, despite the fact, that they very clearly don’t need the money.

The Kardashians’ collective relationships with their bodies are, like most women’s – complicated. But their public profile means their words are taken as gospel (or ‘bible’ as the case may be) and their own obsession with skinniness being the sum total of a person’s worth has always been a red flag. Last summer, Kim was criticised for taking such delight at being called “skinny” and anorexic” because of her intense workout regime and strict diet.

Prior to losing 50 pounds and falling in love with exercise, Khloe said she was urged by “my management side of my family” to lose weight she was “really hurting the brand”. Kourtney is an obsessively clean eater and Kendall and Kylie have the sense, perhaps coming from a younger generation, to keep their thoughts on diet to themselves. Detox tea certainly doesn’t fit in with either sister’s aesthetic: one as a Chanel muse or the other as a would-be billionaire businesswoman enjoying the metabolism that comes with being 21 years old. Their obsession with looks is well-documented and the main frustration with critics is that they are irresponsible in what they decide to promote. Detox tea, to be blunt, gives you excess diaorrehea. It’s not recommended by medical professionals and more often than not, users wind up more bloated after taking it and ridding their bowels.

But everything, even bowel movements, is a storyline opportunity. This particular tribe thrives off controversy, not just for corresponding attention, but for the all important redemption arc that will allow their anchor income, their tv show, to continue.

In October 2017, the Kardashians signed a $150m contract for five more seasons on E!, the network that made them household names, netting them $30m per season. While Kim, Kylie and Kendall have lucrative side gigs in tech, beauty and fashion that net them additional millions and Kris gets 10% of that; Khloe and Kourtney are still finding their independently financial feet. Yes, Khloe’s denim line Good American is a record breaking jean dream, earning $1m in its first day of sales, but it’s still a new business with plenty of overhead, and Kourtney’s main income, is from the show, and that seems to be a choice.

The key to professional entertainment longevity, as Madonna will tell you, is reinvention. And we’ve seen these women (and the oft forgotten male) reinvented countless times over. The way people consume television is changing. Broadcasters around the world are struggling to compete with the viewing figures from streaming services like Netflix and Amazon Prime Video, while the streaming services themselves are quaking at what the next threat looms around the corner.

It’s easy to say no one watches tv anymore, but that’s not true. What is true is that, at least on television, the Kardashians aren’t what they used to be. One episode last year saw 700,000 people tune in. For context, more people watched Mrs Brown’s Boys CSI: Mammy Christmas special on RTE in 2017, than they did KUWTK.

In business they remain untouchable, despite the obvious flaws and the changing shift in demands the public place on celebrities, but the news cycle, particularly in the US, is Kardashian-led and without a few hiccups, like consistent outrage and an inevitable redemption narrative, where would we – and they – be?

If not for Kylie Jenner’s decision to keep her pregnancy away from public life and the girls’ consistent ability to procreate with terrible men, there would be little to report on their show. There are only so many times we can watch sister prank sister without it feeling contrived.

The only alternative to their obsession with shilling this tea is that they simply don’t care, and isn’t that even worse? Trust me, this revolution will absolutely be televised.