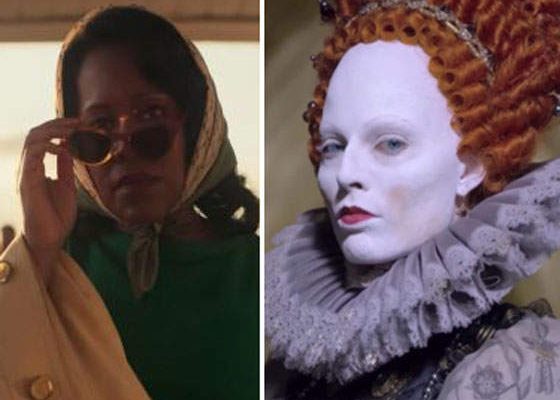 If you’ve got a SAG member in your life and they offer you a toke from their bong, immediately turn down their offer, because they’re obviously smoking the wrong kind of strain.

The nominations for the SAG Awards were announced today. Regina King, who seems to be the Best Supporting Actress Oscar frontrunner and has been collecting noms and wins for If Beale Street Could Talk, was denied a SAG nomination. Margot Robbie got a supporting actress nomination out of nowhere for doing Johnny Depp in Alice in Wonderland drag to play Queen Elizabeth I in Mary, Queen of Scots. If Beale Street could talk, today it’d say, “Really, SAG, really?” The question marks kept coming with Bohemian Rhapsody getting a nomination for Outstanding Performance By A Cast. So did A Star Is Born, which is pretty much a two-trick show (although, I’m glad the real star of that shit, Charlie Cooper, finally got the recognition he deserves. But with that said, Olivia from Widows should file another theft charge against Hollywood for getting robbed again.) Roma also didn’t get anything.

As for the TV side, Keri Russell and Matthew Rhys didn’t get honored for their achievement in working all kinds of wigs. The Americans got a nomination for ensemble, but Keri and Matthew didn’t get individual noms. And even though two people watched Ozark, the show got four nominations.

The nominations are below, and if you wanted further proof that SAG members were smoking some shit while making their nominations. They nominated Emily Blunt twice. They saw the name BLUNT, and couldn’t help themselves. Oh, Regina, Keri and Matthew, you should’ve temporarily changed your names to Mary Jane King, Ganja Russell, and Indica Rhys.

Outstanding Performance by a Female Actor in a Leading Role:
Emily Blunt, “Mary Poppins Returns”
Glenn Close, “The Wife”
Olivia Colman, “The Favourite”
Lady Gaga, “A Star Is Born”
Melissa McCarthy, “Can You Ever Forgive Me?”

Outstanding Performance by an Ensemble in a Drama Series:
“The Americans”
“Better Call Saul”
“The Handmaid’s Tale”
“Ozark”
“This Is Us”

Outstanding Performance by an Ensemble in a Comedy Series:
“Atlanta”
“Barry”
“GLOW”
“The Kominsky Method”
“The Marvelous Mrs. Maisel”