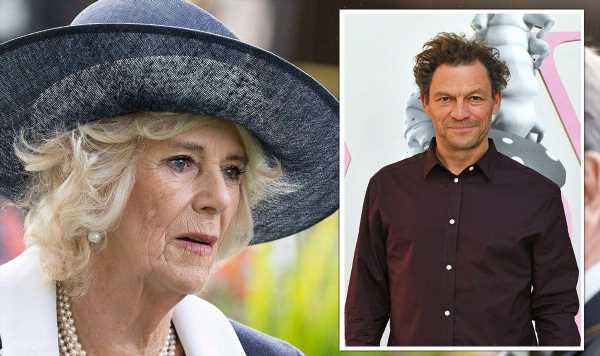 Dominic West, 53, who is depicting King Charles when he was Prince Charles, in the upcoming fifth series of Netflix hit The Crown, has spoken out against the treatment of Camilla shortly after a private conversation between her and the King emerged back in 1993. Known as “Tampon gate” the actor declared to the Radio Times that one of the reasons why the Queen Consort was treated so badly was due to her being a woman.

Amid declaring his support for the monarchy, Dominic commented: “I never really thought about it at the time, but the research showed me how badly Camilla was treated.

“I don’t think that would happen today. It happened for many reasons, one of them being she’s a woman.”

Speaking further on the so-called “Tampon gate”, which is dealt with in the long awaited and controversial series, Dominic said: “Like most people, I remember thinking it was a sordid, embarrassing discussion.

“But revisiting it, I found it was just an intensely personal conversation, and what was sordid was the prurient interest in it.”

The actor finished by saying that he thought in actuality the moment was “very sweet” but the intensely personal conversation just was never meant for public consumption.

In another interview with Entertainment Weekly, Dominic called the press “invasive” and “disgusting”.

At the time a full transcript of the telephone call between King Charles and Camilla held in 1989 was printed in the newspaper.

The call, which lasted for around six minutes went into detail as the long-time lovers fantasised about being intimate with each other.

The scandal got its name after the now monarch said that he wished to transform into a Tampax so he could live inside her trousers.

Defended by Dominic, the actor shared that his admiration for the monarch has only grown since taking on the role, and watching events for the Queen’s funeral.

Saying that the events of the Queen’s state funeral was a “goldmine” to help him get into the character, as filming for the six series of The Crown commenced, Dominic also gave insight into the Royal Family’s view on him taking on the role.

After accepting the role, Dominic tried to resign as an ambassador for the Prince’s Trust in case of a perceived conflict of interests.

Yet the actor’s resignation letter was rejected by the King’s private secretary. In another humorous incident Queen Consort Camilla is reported to have referred to Dominic jokingly as “Your Majesty”.

Seeming to approve of him taking the role, Dominic revealed that in the letter of reply from the King, he had written something along the lines of: “You do what you like, you’re an actor. It’s nothing to do with us.”

Unlike Dominic, who had to play out the scenes of “Tampon gate”, his predecessor actor Josh O’Connor, reportedly made it a condition of his contract that he would not be forced to act in the reconstruction.

Speaking to SiriusXM he said: “When they offered me the role one of my first questions was — I say questions, I think it was pretty much a statement — ‘We are not doing the tampon phone call’.”

Josh, 32, explained that he was thinking about his parents and his acting legacy: “This was my one chance for my parents to see something with no shame and there’s no way I was going to scuttle that by talking about tampons on Netflix.”

He added: “All the fans of Tampongate will be very disappointed.”

Dominic plays alongside Imelda Staunton as the late Queen Eliabeth II and his 13-year-old son Senan, who depicts a young Prince William. Series five of The Crown is available on Netflix from November 9 2022.