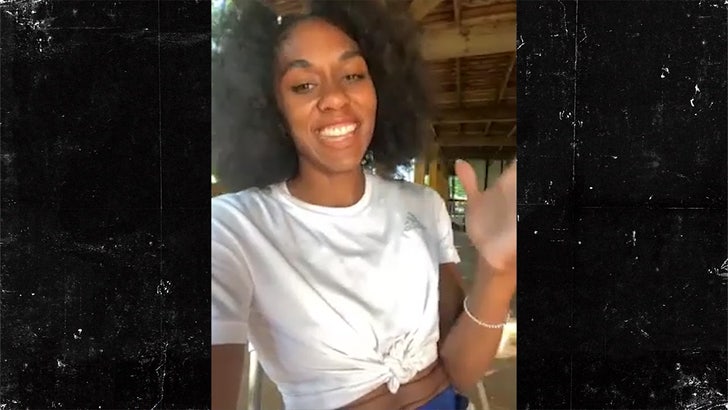 10:18 AM PT — 6/22 — Clemons tells TMZ Sports she was completely shocked by the reaction to her earrings … but says she’s hoping to work with Doritos to get hooked up with a commercial or some free chips!!

“If they want an Olympian on their team, they know who to choose!” Clemons tells us.

Clemons also talked to us about how the past few days have been — making the Olympic team and going viral in the same day — and gives her immediate reaction to getting the epic shoutout from Doritos on Twitter!!

Check out U.S. track star Christina Clemons — who rocked the snacky jewelry during her 100m hurdles race this weekend … AND MADE THE OLYMPIC TEAM!!!

The 31-year-old — who had never made the Olympics team in the past — put up a scorching 12.53 finish at the U.S. Olympic Track & Field Trials in Oregon on Sunday … earning her a spot on Team USA!

Now, Christina is smartly hitting up Doritos for an endorsement deal — and we gotta say … IT’S GENIUS!!!

Not only does Christina have an incredible backstory … overcoming injuries and defying the odds … but she also apparently LOVES the chips!

“I made the Olympic team wearing a bag of @Doritos on my ears,” Clemons tweeted … “Twitter, I need y’all to do your thing! We need to blow Doritos mentions UP ???”

Hey, the Doritos slogan is “For the Bold” — and what’s bolder than wearing chip bags on your ears for the biggest race of your life … and then winning!?!?

So far, Doritos hasn’t responded to Christina — but we gotta imagine they’re gonna jump all over this.

And, if they need more convincing … just watch Christina’s emotional post-race speech when she explained all that she’s overcome.

10:48 AM PT — We just spoke with Clemons and asked about the story behind the earrings … here’s what she said!

“It’s funny because when I trained at Alabama State University the athletes named me ‘Dorito’ because I have broad shoulders and a small waist.”

As for rocking the earrings this weekend, Clemons says … “They matched my uniform and were so cute and I do love Doritos — but the spicy nacho kind.”

11:59 AM PT — Whoops!! Clemons just hit us up to retract the origin of her nickname … telling us it was actually her husband — Olympic gold medalist Kyle Clemons — who was the first to call her “Dorito.”

Once her athlete friends at Alabama State got wind of it, they called her by the nickname faithfully ever since!!