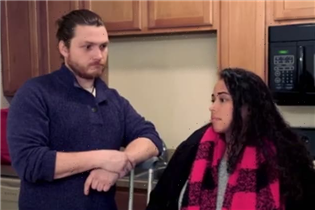 When we last checked in on 90 Day Fiance star Syngin Colchester, he had almost died in the woods.

Don’t hike alone in the middle of the woods with no way of getting home.

From his latest photo, it’s not clear if he’s gotten that message, because he’s once again adventuring outdoors.

Syngin teases that he’ll be back on television pretty soon … but will he be on The Single Life?

He apologized: “Sorry I dont share my hole life on a social media platform…”

We’re sure that he meant his whole life and is not apologizing for not being on OnlyFans.

“But I do miss my people so much…” Syngin expressed.

“I will also be back on tv in like 2 months hahahah..” he promised to fans.

Before we get into the timeline stuff, “oooo f–k s–t went down” is unsurprising.

He and Tania Maduro have been messy from the start.

So it’s no surprise to hear that there was a lot of drama.

Since they’ve been through this before, we could be looking at more conflict with a resolution.

We could also be looking at a messy breakup that could see Syngin appearing on The Single Life, as some fans are speculating.

There have been hints in that direction, including some cryptic social media activity surrounding Syngin’s injury this spring.

Dating profiles using his image cropped up around that time … though anyone can use a famous person’s pics.

That’s kind of the whole basis of catfishing, but it could mean that there was a breakup (or worse) around that time.

Syngin did not confirm or deny anything in the comments, save to say that he “can’t say.”

He doesn’t need to violate his NDA to drop hints, but he’s clearly being coy.

So … about the timeline of Syngin returning to TV “in like 2 months.”

It’s true that The Single Life has reportedly been filming recently and likely still is.

This will be the second season of the Discovery Plus series (while Season 1 is now playing on TLC, many months later).

The spinoff follows stars who loved and lost on the franchise but are getting another shot at love … or trying for one.

Here’s the thing: filming now doesn’t fit the timeline for a premiere “in like 2 months.” At all.

On average, most 90 Day Fiance content is filmed more or less 8 months ahead of time. Sometimes more.

Case in point: Ellie and Victor’s storyline is airing right now, and it was filmed last November. That’s 10 months.

A safe guess is that The Single Life will premiere early next year.

If it follows in Season 1’s footsteps, probably around February.

But there is a 90 Day Fiance show that will begin airing “in like 2 months” from now.

We are referring, of course, to original recipe 90 Day Fiance — which will return soon for Season 9.

Syngin and Tania probably filmed very early this year (possibly even before his accident, but maybe not).

That doesn’t mean that Syngin and Tania haven’t split … but if they did break up, we might see it all play out on screen.