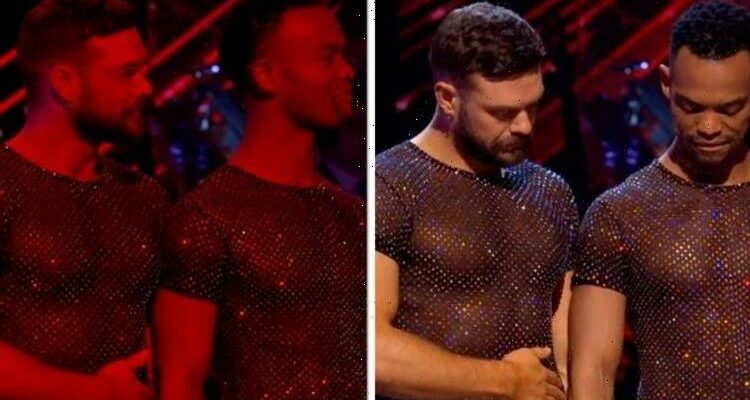 Strictly: John and Johannes react to being in bottom two

John Whaite, 32, said he “expected” to be in the Strictly Come Dancing bottom two last weekend, despite two impressive routines. The Great British Bake Off star spoke out while on the results show last night.

I was expecting this. We’re going to go out there and give it all we’ve got.

Presenter Tess Daly was seen announcing which couples were to compete in the dance-off.

The three pairs who stood on stage were Rhys Stephenson and Nancy Xu, AJ Odudu and Kai Widdrington, as well as John and Johannes Radebe.

The Strictly host then delivered the news to the audience and contestants as to who would be performing again.

Tess said that John and Johannes would be the couple to compete.

She added that the other two couples had to wait a little longer to find out if they were through to the final.

Tess asked John and Johannes to join her on stage.

“You are here, one week away from the final. How are you feeling?”

John replied: “Absolutely excited to do that jive again.

“I’m wearing this for crying out loud,” the dancer said, pointing out his flamboyant, sparkly costume.

He continued: “I was expecting this. We’re going to go out there and give it all we’ve got, aren’t we?” he concluded, glancing at partner Johannes.

The audience then erupted into applause.

Tess explained to the judges that John hadn’t been in a dance off until now, and asked them to give the dancers their words of encouragement.

The judge said: “I would say to you darling, it’s just another day at the office.

“Go out there and do exactly what you did on Saturday evening.”

Shirley continued saying that John has had the “journey of a lifetime” so far and he shouldn’t let it be the end, wishing him the best of luck.

Thankfully he was saved by the panel, with Rhys and Nancy exiting the competition.

He has recently spoken up about his difficulty in performing on the show, due to past bullying about his sexuality.

The star said that when he and Johannes were getting ready to dance on the show, he felt “the world wasn’t ready” for two men to dance together.

John made the comments during Saturday night’s show before he and Johannes performed their Couple’s Choice routine to Adele’s Hometown Glory.

The GBBO winner dedicated the dance to everyone who had supported him throughout his life.