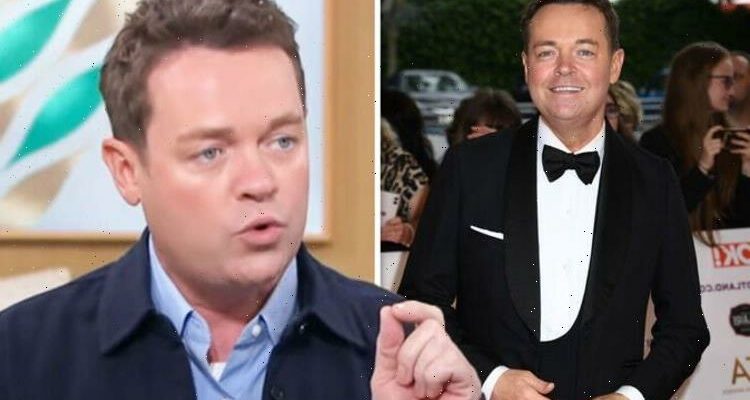 Dancing On Ice: Stephen Mulhern fills in for Phillip Schofield

Stephen Mulhern has reportedly been discharged from hospital after being treated for a mystery illness which forced him to pull out of Ant and Dec’s Saturday Night Takeaway co-hosting duties. The 44-year-old presenter is said to be recovering at home after undergoing treatment.

It has almost been a month since the ITV favourite was last seen on Saturday Night Takeaway as he featured on the opening show of the latest series.

His absence from the show had sparked concern from social media users.

But it has now been reported that the star is resting at home just hours after Stephen spoke out on Twitter.

A source told The Sun on Sunday: “Stephen went to hospital for a medical procedure, but has been discharged now and is focusing all his energy on his recovery.

“He’s hoping to return to the show as soon as he’s feeling better and well enough. He’s currently resting up and supporting the lads from home.”

It comes after Stephen broke his silence about his show absence as he told fans he was taking some time off in a rare tweet.

In view of his 675,000 followers, he penned yesterday: “Hello all, Sorry I’ve been quiet on here recently and thank you for all your lovely messages.

“I’ve had some time off and been resting up on doctors orders.

“I’m on the mend, I’m happy to say, and looking forward to getting back to work soon. In the meantime…”

Stephen added: “…I’ll put my feet up and watch Saturday Night Takeaway tonight with the rest of you lot. Please don’t miss me too much! Lots of love, Stephen.”

The ITV favourite was swiftly inundated with messages as fans shared their concern.

Twitter user, Kevan Brighting penned: “Sorry to read that you are not feeling your best Stephen. Hopefully you’ll be back to your usual exuberant self very soon. Take care.”

Krishna Julia Ellis quizzed: “Are you ok what happened?”

Gemma Willmott added: “Sorry to hear you are poorly. Saturday Night Takeaway is not the same without you. Sending you lots of get well wishes. You are amazing and our favourite entertainer. Take care xx.”

The show’s most recent episode where contestants “don’t just watch the adverts, they win them” had Paloma Faith as the guest announcer with appearances from Fleur East and Strictly Come Dancing’s Craig Revel Horwood.

Despite having a star-studded roster, regular Stephen was nowhere to be seen.

He has worked with Geordie pair Ant and Dec for many years and is a staple on ITV, appearing on many of the channel’s shows.