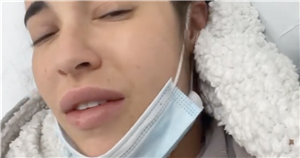 Stephanie Davis has revealed her oxygen levels "aren't great" as she spoke from her hospital bed on Saturday 3 July.

The former Hollyoaks actress, 28, spoke in a video on her Instagram story after she was hospitalised with coronavirus earlier this week.

Stephanie, who recently put on a loved up display with her new man Oliver, revealed she had been given morphine to try and treat the pain.

Actress Stephanie told her 980,000 Instagram followers: "Hi everyone, just want to say, thanks for the messages. There's been loads and obviously, I've been feeling too s*** to reply."

She added: "I've not been well at all. I've just had some morphine in an intravenous drip and that's really helped with the pain.

"I don't even know whether this is like, what… I've been getting severe pains in my esophagus in my chest.

As she laid in a hospital bed with a face covering under her chin, Stephanie continued: "Even whenever I sip water, the pain is unreal. So I don't even know if it's related or what."

Stephanie added she was feel "very spaced out" as she continued to update fans on her symptoms.

"The pain in my skin, oh my God. Honestly, I couldn't touch my skin and I can't even think straight…" she said.

After a long pause, Stephanie went on: "My chest is so bad, my oxygen levels aren't great.

"And, obviously, the pain here," she said while touching her chest. "So I think I'll get seen to when the doctors come round."

"This pain in my chest, I'm guessing, it's all link because it's only just started since all of this.

"Pain is killing me. I can't even… when the water goes down the pain is unreal."

Stephanie explained she had been given some fluids because she is dehydrated before signing off with: "I'm alright, I'll keep you posted."

It comes after Stephanie revealed she had been hospitalised with Covid-19 earlier this week.

In a video posted on Thursday 1 July, she said: "Hello guys, so last night I got a bit of a headache before bed and my sinuses, I woke up and I felt so ill, I had to call an ambulance basically.

"I've tested positive for Covid. I feel like I've been ran over. The worst part is that my skin, my front and back of my skin, I can't touch my skin, it's killing me."