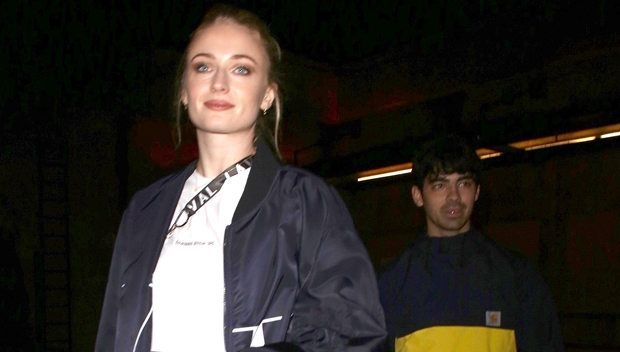 Sophie Turner and Joe Jonas enjoyed a date night at a bowling alley in Los Angeles on Mar. 2 and they couldn’t help but express their love for each other by flaunting major PDA!

Sophie Turner, 23, and Joe Jonas, 29, looked like a sweet couple in love when they spent the night kissing each other in public at a bowling alley in Los Angeles on Mar. 2. The engaged lovebirds were joined by Joe’s brothers, Kevin, 31, and Nick, 26, for the fun outing, but that didn’t stop them from expressing their romantic PDA in between rolling the balls! The foursome, which didn’t include Kevin’s wife, Danielle, 31, or Nick’s wife, Priyanka Chopra, 36, appeared to be having a great time, as they joked with each other and laughed throughout the night.

It’s not just the brothers who hang out together, either. In Jan., Sophie and Priyanka were seen happily having a girls’ night and getting dinner together in West Hollywood without their men. They were all smiles and looked like best friends as they walked alongside each other, proving their bond as soon-to-be sisters-in-law is quickly forming.

The JoBros’ gals have a lot to be excited about. In addition to their own successful careers, Kevin, Nick,  and Joe also have a big year ahead. They released their first single and music video as the Jonas Brothers, in 10 years, on Feb. 28. “Sucker” was an immediate hit with the their fans and the music video featured all three of the brothers’ ladies posing with their men. The first live performance of the new song is set to take place on The Late Late Show With James Corden on Mar. 4, and it’s most likely just one of many upcoming performances the reunion is going to bring.

We can’t wait to see more of the JoBros and their gorgeous ladies’s fun times in the future! It’s great to see all three of them happy and in love!