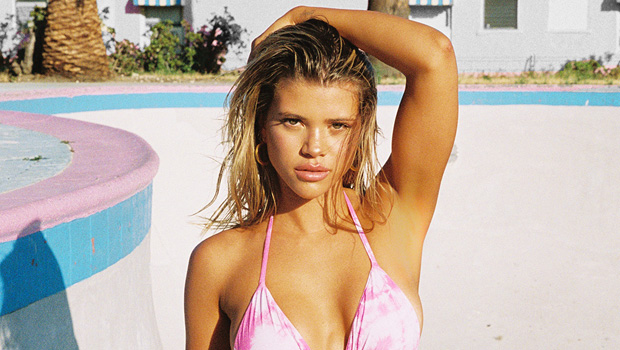 Sofia Richie wrote that she’s ‘salty but sweet’ underneath her bikini photo, but one fan was just salty after accusing the model of FaceTuning her vacation photo taken amid her girls’ trip with Kylie Jenner.

Eagle-eyed fans are always seeking out curvy lines in celebrities’ Instagram photos, which is what one fan tried to do under Sofia Richie’s bikini photo [SEEN HERE] on July 15! The 20-year-old model showed off her perfectly toned bikini body in a leopard print set from Lahana Swim amid a getaway in the Turks and Caicos Islands, but the aforementioned fan was suspicious that the picture was too picture-perfect. “The curve of the wall sis,,, we were all rooting for you to not facetune like the rest of them!” the Instagram follower wrote, but Sofia was quick to clap back.

“Thanks boo! But that is an archway 😘,” Sofia replied, explaining why the fan might’ve seen a curved line in the brick wall behind the model. There was a cheerleader in Sofia’s comments section however, and it was none other than Kylie Jenner, 21! “Wow 😍😍😍😍,” the makeup mogul commented under Sofia’s bikini photo, but she didn’t fire off the sweet note from across the notion. The ladies are actually on a girls’ trip together with other members of Kylie’s entourage to celebrate the new Kylie Skincare line, and took a private jet to Turks and Caicos on July 12.

Sofia has taken advantage of her tropical setting, as she has been updating her Instagram with a steady stream of bikini photos only! In a series of photos shared on July 14, Sofia laid back on the sand and even posed topless in a hot pink string bikini, and noted that she’s “on a mission to tan.” Meanwhile, Kylie’s grid isn’t looking that different — she posed nude herself in that one iconic photo.

Even before jetting off to the middle of the ocean, Sofia was still posting up a storm of bikini photos — but they weren’t vacation mementos! Scott Disick’s girlfriend was actually promoting her new swimwear collection with Frankie’s Bikinis, which launched on July 8.