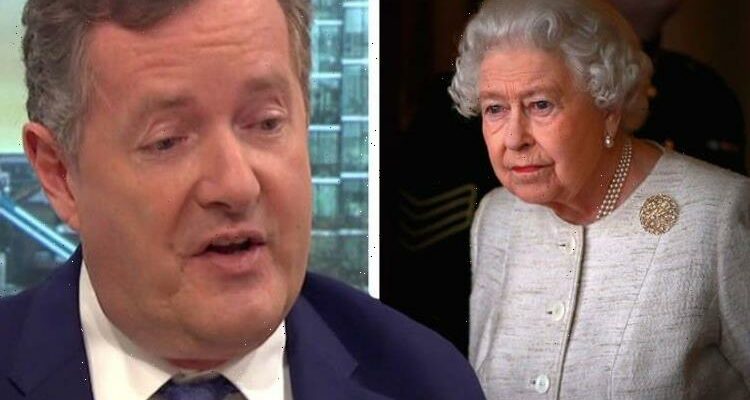 Piers Morgan, 56, has often spoken out about how he feels for the Queen and all she’s been through over the past few years; marred with alleged scandals, racism claims and the stripping of former titles. And in wake of Andrew losing his status as HRH, the ex Good Morning Britain star penned a sorrowful message about the highly-respected lady caught in the middle of it all.

I feel so sorry for the Queen

Taking to Twitter on Thursday after Buckingham Palace announced The Duke of York’s military titles and royal patronages have been returned to the Queen, Piers admitted: “I feel so sorry for the Queen.

“In the last year she’s lost the love of her life, endured the Monarchy she heads being repeatedly trashed by the Sussex clowns, & suffered what must be any mother’s nightmare over Andrew’s deplorable conduct.

It comes after the statement by the palace read: “With the Queen’s approval and agreement, the Duke of York’s military affiliations and Royal patronages have been returned to the Queen.

“The Duke of York will continue not to undertake any public duties and is defending this case as a private citizen.”

The Jeffrey Epstein sexual abuse case has made headlines around the world, with many calling for Andrew to be held accountable for the claims made against him.

He has strongly denied the allegations and his representatives say that fighting the case is a “marathon and not a sprint”.

But the Royal Family have now firmly distanced themselves from the toxic fall-out from the allegations.

The Duke will now have to defend himself against his alleged victim Virginia Giuffre, as a private citizen.

But Piers had another bee in his bonnet when it came to defending the Queen.

At Prince Philip’s funeral service in April, she was forced to sit alone; a photo that made a very solemn impression on the nation as we continue to fight Covid.

But Piers’ issue fell on Prime Minister Boris Johnson and the UK Government, for laying down the law for the country and faking to abide by it themselves.

The latest Downing Street party scandal saw Piers and the rest of the UK blast leaked emails that alleged a “Bring Your Own Booze” get-together was held in the garden of No10 on 20 May 2020 when the rest of the country was in lockdown.

Around 100 staff members were reportedly told to “make the most of the weather”, when millions across the UK were banned from meeting more than one other person outdoors.

It is understood that an estimated 40 staff attended the gathering, which was held outdoors and involved picnic food and drinks.

Piers joined those calling for Mr Johnson’s resignation on Tuesday this week, taking to his Instagram the following morning to launch an attack on the “brazen” behaviour and “outrageous hypocrisy”, calling it a “disgusting slap in the teeth”.

The 56-year-old wrote: “REMINDER: Boris Johnson made the Queen sit alone at her husband’s funeral, just as he separated so many families in their darkest moments in this pandemic.

“Yet all the time he and his staff were brazenly ignoring their own rules with endless illegal parties at No10.

“Just outrageous hypocrisy and a disgusting slap in the teeth to everyone, like Her Majesty, who followed the rules at often great personal sacrifice,” he continued.

“That’s why this scandal is now rightly pushing the Prime Minister towards a political cliff edge. His authority has been destroyed at the altar of shameful double standards,” he added.