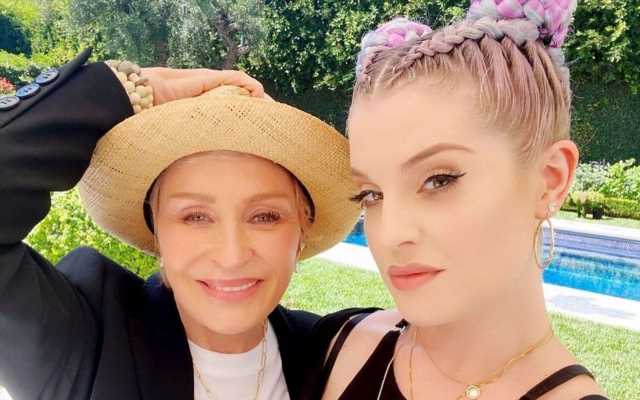 Sharon lets it slip the moniker picked by her daughter Kelly Osbourne for her first child with boyfriend Sid Wilson, roughly two months after the baby boy was born.

AceShowbiz –Kelly Osbourne‘s baby boy is named Sydney. The 38-year-old reality star – who is the daughter of Black Sabbath rocker Ozzy Osbourne, 74, and wife Sharon Osbourne, 70 – gave birth to her first baby with boyfriend Sid Wilson November last year and now her mother has revealed his moniker but also explained that she is determined to keep him out of the media glare.

“She has [had the baby], yeah. Sydney. They’re doing so so great. She won’t let a picture go out of him and I am so proud of her,” she said when asked about becoming a grandparent again during an appearance on UK chat show “The Talk“.

During the pregnancy, Ozzy Osbourne had struggled to keep the news that he was set to welcome a grandson a secret. Kelly said, “I mean, he’s told everyone … the gender of my baby before I ever got the chance to.”

Her dad – who, with the former “The X Factor” judge, is already a grandparent to son Jack Osbourne‘s daughters Andy, seven, Pearl, 10, Minnie, four, and newborn Maple, born in July – had been doing a “little song and dance” about his then-upcoming grandchild and had been making lots of plans for his arrival.

She said, “I’m just like, ‘Aww Dad, come on. Like, come on,’ but I will say, every single day he does this little song and this little dance about how excited he is, and he is so excited that it’s a boy. It’s the first – out of me and my brother, it’s the first boy, so, he’s like planning all these things.”