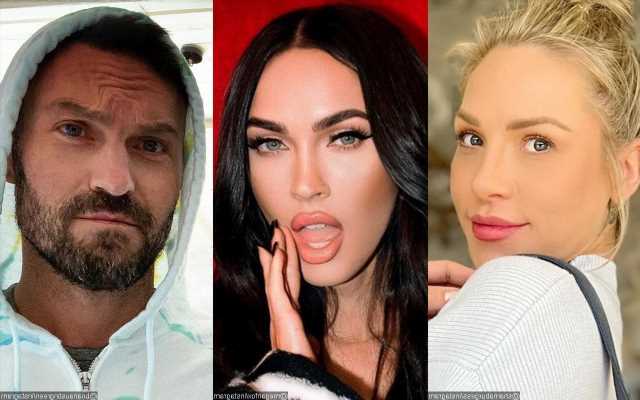 The ‘Dancing with the Stars’ professional reveals that she’s keen to meet up with the ‘Transformers’ beauty ‘four or five months’ after she started dating Brian Austin Green.

AceShowbiz –Sharna Burgess has confessed that she reached out to Megan Fox to discuss co-parenting. In a new interview, the “Dancing with the Stars” pro revealed that she texted the “Transformers” star “four or five months” after she started dating the actress’ ex-husband Brian Austin Green.

The 36-year-old dancer is expecting a baby boy with the 48-year-old actor, who has Noah, nine, Bodhi, eight, and Journey, five, with Megan, as well Kassius, 20, with Vanessa Marcil, and she has revealed she was keen to meet up with the “Jennifer’s Body” star to make their family situation as easy as possible.

Speaking on “The Viall Files” podcast, Sharna said, “After we’d been dating for about four or five months I was like, ‘Can I get Megan’s number?’ I’d love to text her … I’d love to reach out and say, ‘Hey, I’m around your kids all the time, if you ever want to know anything about me or if you ever want to get coffee, let me know. If there is any way I can support you in being part of this situation, let me know.'”

And it went down well with Megan. Sharna added, “I think she really appreciated that, and she said, ‘Thank you.’ And she’s thanked me for being great with her kids, too.”

The Australian ballroom dancer also insisted she would never compare her relationship with Brian to Megan’s because it “doesn’t make sense” to. She said, “You can’t walk into a new situation with someone and expect them to leave behind everything that they’re experiencing or have been through. Brian had a whole life with another person and babies.”

“I wanted to know him, to support him, to love him … but there is no comparison, and why would you compare? That obviously didn’t work for a reason,” Sharna further elaborated. “For me to compare myself to that or to bring that into this relationship doesn’t make sense.”