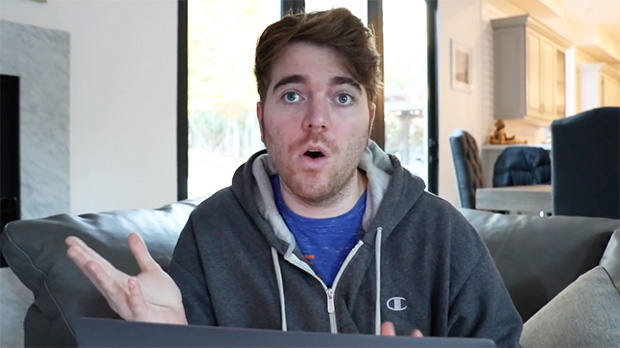 Does Chuck E Cheese reuse leftover pizza and serve it to new customers?! That’s what Shane Dawson thinks, and he’s revealing why in this shocking new conspiracy theory video!

UPDATE: “The claims made in this video against Chuck E. Cheese’s and our pizza are unequivocally false,” a representative for Chuck E. Cheese’s told HollywoodLife in a statement. “No conspiracies here — our pizzas are made to order and we prepare our dough fresh in restaurant, which means that they’re not always perfectly uniform in shape, but always delicious.”

Shane Dawson loves investigating conspiracy theories, and in a new video posted on Feb. 11, he brought up a shocking theory about Chuck E Cheese. “I noticed that whenever I would go to Chuck E Cheese, my theory as a kid…was about the pizza,” he explained. “There is a theory that if somebody at Chuck E Cheese doesn’t finish their whole pizza and there’s a few pieces left, the employee will take it back, take the pieces off the tray, and form a new pizza with all the leftovers, then reheat it and serve it to a customer.”

He explained that his theory generated from seeing how differently the slices in a Chuck E Cheese pizza were cut. “Every piece is a different size!” he said, showing a photo of the uneven slices. “And none of the pepperonis line up! It’s not just this picture, it’s almost every picture you find of Chuck E Cheese pizza. I noticed it when I was eight years old, and I remember specifically being like…can we have half cheese and half pepperoni? And the half cheese size was SO much different than the pepperoni side. I went there a lot and it was ALWAYS displaced pizzas!”

Shane put his theory to the test in high school, when he approached a girl he knew who actually worked at the restaurant. “She told me that she couldn’t say whether or not it’s true, but that was a thing, and it’s something that was going on a while ago and they stopped it,” he revealed. “She could’ve been lying…who knows. I never looked into it because, who cares? But I just Googled it and I found a form — and other people have noticed this, too!”

The YouTube star decided to actually pay a visit to Chuck E Cheese himself and see if the mismatched pizza slices was still a thing today. It turned out, the pizzas Shane and his friends were served WERE uneven! “The cut’s not even!” one friend exclaimed, while Shane added, “That’s undeniable. Like, that’s crazy. This is, like, a problem.”

Shane even went as far as asking an employee about what the deal was with the pizza, and although their interaction wasn’t caught on camera, he reenacted the situation. He claimed the employee wouldn’t stop giggling, and when he showed her a photo of the uneven pizza, she just laughed and said, “Oh yeah, that’s not good!” HollywoodLife has reached out to Chuck E Cheese for comment.