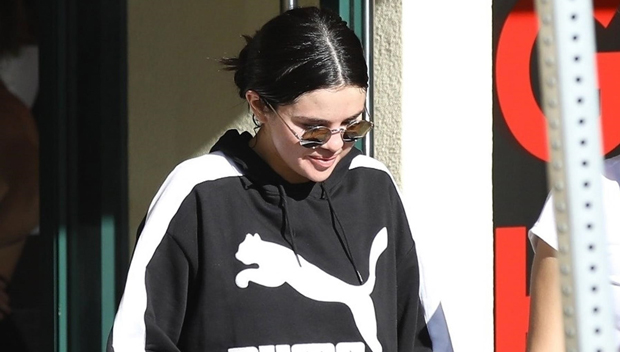 Selena Gomez has been on a fitness kick since returning to the public’s eye, and was glowing as she left a pilates studio with pals on Dec. 27.

A pilates session with friends left Selena Gomez, 26, in a sunny mood, as she was pictured leaving the studio, laughing, in Hollywood on Dec. 27. The “Fetish” singer wore round sunnies and the same Puma hoodie that we saw her hike in on Christmas Eve! Ever since her first post-rehab pictures surfaced on Dec. 18, which documented a skiing trip with friends and actress Bailee Madison in Big Bear, Calif., Selena has been taking care of herself via endorphin-inducing activities. She has been pictured on a total of four hikes this December.

But you don’t just get endorphins from working out! In the days following the skiing getaway, Selena has been spending quality time with close friends. She was pictured smiling, again, after leaving a lunch with pals in Los Angeles on Dec. 23. Earlier that day, she was also seen touting a Bible as the singer exited Church with another peer following closely behind.

We love seeing Selena out and about in great spirits after she sought treatment at a mental health facility in October, following a hospitalization for a “low white blood cell count,” per TMZ. While she’s making a comeback in public, Selena will be continuing her hiatus from social media, we’re hearing. “Selena is not focusing any interest on returning to social media anytime soon,” a source close to the “Wolves” singer EXCLUSIVELY told HollywoodLife on Dec. 20. “She knows she will have to return at some point but it’s going to be completely different and more promotional then anything else.”

After the Disney alum announced her social media break on Sept. 23, our source adds that “it’s been a reassuring time for her to be away from it because it is just one less thing to worry about. The rabbit hole of negativity it brings is something she really doesn’t want to be a part of anymore. She wants to get to the end of the year with family and friends and be happy and healthy.” And we’re already seeing that happen!