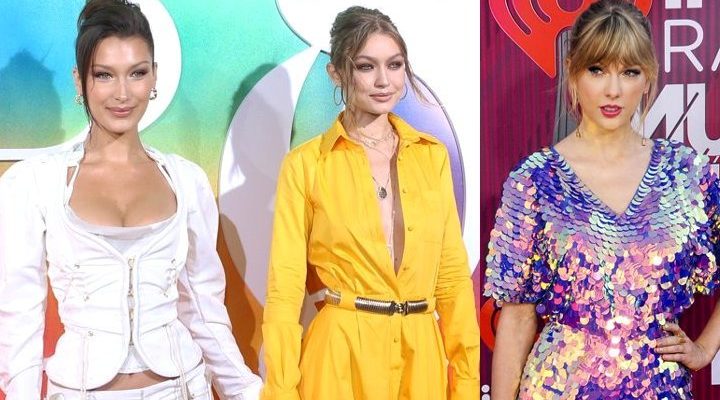 AceShowbiz -Happy birthday, Gigi Hadid! The Victoria’s Secret model, who is turning 24 on April 23, celebrated her birthday early on Monday evening, April 22 at the L’Avenue restaurant in New York City. Among those who showed up to the bash were her sister, Bella Hadid, as well as her good friend Taylor Swift.

The Hadid sisters were matching in denim outfit, with Gigi teaming her loose fitting jacket with distressed straight-leg jeans and a white crop top that flaunted her toned stomach. Her dark blonde hair was left in its naturally loose state. Meanwhile, her younger sister looked stunning in three-piece denim outfit that featured oversized jacket and bustier among others. She styled her hair into a neat bun.

As for the “Look What You Made Me Do” songstress, she looked adorable in a red checked blazer over a colorful floral dress. Matching her newly pink-tipped hair, Taylor completed the look with strappy heels.

In several videos that were posted by other attendees, Bella and mother Yolanda Hadid were seen presenting Gigi with her birthday cake, which spelled out the number “24.” The latter looked genuinely excited to see her cake as she blew of the candles. Other videos saw the blonde beauty having fun dancing with Yolanda and Bella.

Similar to her previous birthday parties, there was a photo booth where guests could take pictures with their friends and birthday girl. Taylor shared on Instagram Stories a picture of her along with Gigi, Abigael Lauren, Martha Hunt and Hailee Steinfeld inside the booth. “I love you so much Gigi,” she wrote along with the image. “Happy birthday.”

Gigi’s half-sister Alana Hadid, meanwhile, posted an image of her with Gigi, Bella and their dad Mohammed Hadid. There was also a photo of Mohammed and Gigi alone. “Fam,” Alana wrote on the first photo.