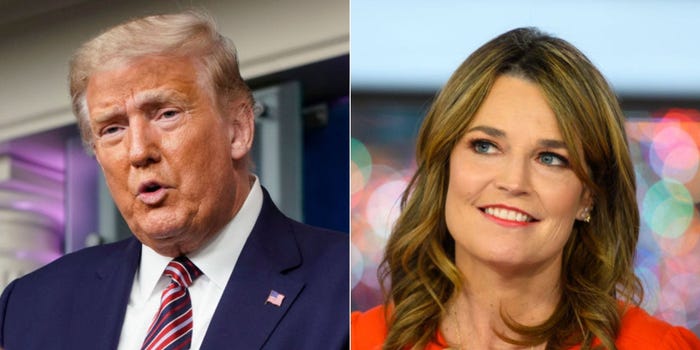 Guthrie pointed out to Trump that in days leading up to the town hall, he had retweeted two posts that promoted a baseless conspiracy theory that claimed Osama bin Laden's death was a hoax, and about now-President-elect Joe Biden's involvement in bin Laden's death.

"Why would you send a lie like that to your followers?" Guthrie asked Trump during the town hall.

"I know nothing about it," Trump responded to Guthrie. "That was a retweet, that was an opinion of somebody. I'll put it out there, people can decide for themselves, I don't take a position."

"I don't get that," Guthrie said. "You're the president — you're not, like, someone's crazy uncle who can just retweet whatever."

The anchor's challenge to Trump later sparked a parody on "Saturday Night Live" starring Alec Baldwin as the president, and Kate McKinnon, who borrowed Guthrie's actual magenta suit for the sketch. During the skit, McKinnon had described herself — playing Guthrie — as a "surprise badass."

In a feature for the New York Times that was published on Saturday, Guthrie told journalist Sridhar Pappu that she was not expecting to make the now-viral "crazy uncle" analogy during the town hall.

"I'm shocked at myself," Guthrie told Pappu. "I don't even know if it's a good thing that I said it. That just came out."

Guthrie is widely known for her role as a host of the network's morning show "Today" and she garnered attention and praise for her unwavering demeanor during the town hall interview with Trump. The anchor said that her questions for Trump "were actually really simple."

Pappu described Guthrie as planning to be a "bolder name" on NBC as President-elect Joe Biden prepares to take office.

Hoda Kotb, Guthrie's "Today" co-host, told the Times that Guthrie is more than her role on the morning show.

"When people see you on morning shows, they see you not only doing the tough stuff but also doing the fun stuff that we do and maybe that overshadows that," Kotb said. "I think some people forget that's who she is."

Read the full story from the New York Times here.