Mayra Verónica, who dated Sam in 2015, revealed she thought her model ex-boyfriend ‘hit the jackpot’ with fiancée Britney Spears!

Britney Spears‘s ex-girlfriend Mayra Verónica is so happy for the model and fiancée Britney Spears, 39, after their recent engagement. “I feel great, I feel very happy for them — he finally hit the jackpot!” Mayra, who is an actress best known for film Pledge This! and Miami Snow, said to TMZ on Saturday, Sept. 18 outside of the Beverly Wilshire Hotel. The 41-year-old was quick to explain that Britney hit the “jackpot,” as well.

“She hit the jackpot, too — he’s supportive. A really, really supportive guy. And after all she’s been through, she deserves that,” Mayra added, referencing the pop star’s on-going battle to end her legal conservatorship against dad Jamie Spears, 68, which she’s been under for 13 years.

When Mayra was asked if she thought Sam was in the relationship with Britney for the “right reasons,” she once again only had positive things to add. “He was a really sweet guy. I was in a similar position when I met him — my management, my publicists were extremely, extremely controlling. He was always super, super supportive so I think she’s with the right guy,” she added. 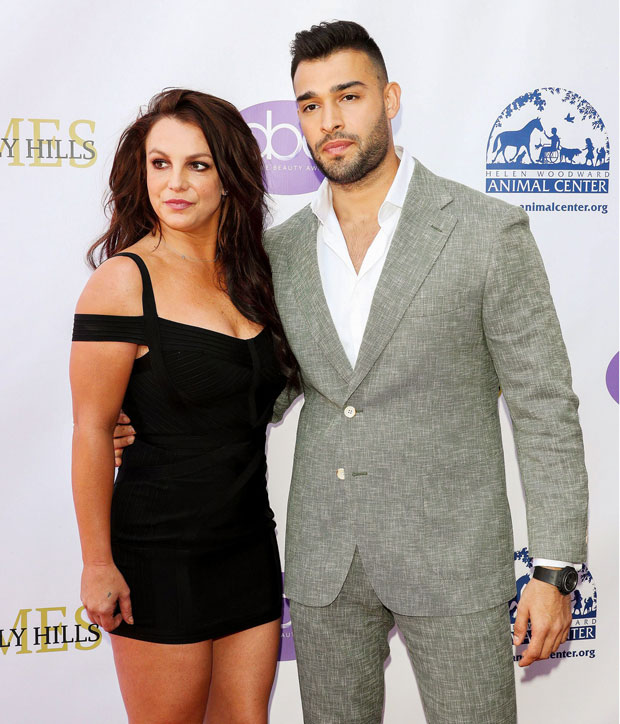 Britney and Sam originally met back in 2016 after he co-starred in her and Tinashe‘s “Slumber Party” music video. The song was one of the lead single’s from her Glory album, which was the last full-length project released by the Mickey Mouse Club alum. In her recent court testimonies, Britney confirmed she refuses to work — including live performances — until her conservatorship is done.

Sam has been a source of support for Britney over their five-year relationship, particularly through her current legal battle. Mayra added that she “hopes” the couple’s relationship “lasts,” but that it’s “hard to tell” in Hollywood. “I hope [it lasts],” she added in the brief interview. “With Hollywood it’s hard to tell…but he’s just such a charming, sweet guy so I hope so, for her sake. I hope it lasts,” she explained.

Britney took to Instagram to confirm her engagement to Sam just before the MTV Movie Awards aired on Sunday, Sept. 12! The blonde showed off her circle cut engagement ring in a brief, edited video as Sam beamed next to her. “can’t f***ing believe it!!!!!!” Britney gushed in the caption.