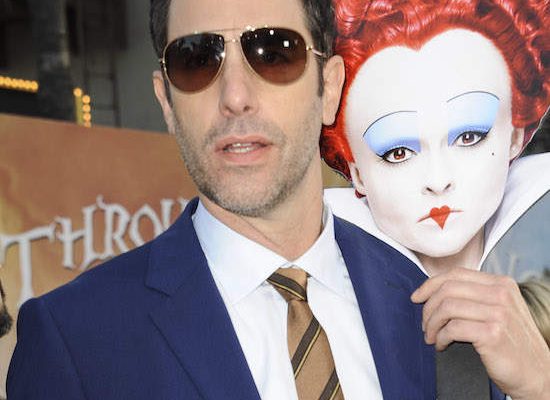 It’s awards season in Tinseltown, which means Fox News writers are giddily pre-writing all their stories on how left wing California actors are taking a giant poop on their moral ways. Enter: Sacha Baron Cohen. The prankster really got under Trump supporter skin this year for Who Is America? The mockumentary somehow managed to bamboozle Dick Cheney into signing a waterboarding kit, got Roy Moore to stand in front of a pedophile meter, and got free press from Sarah Palin (no, that’s not her next to him in the pic above) without her making the cut. Naturally, the Hollywood Foreign Press awarded that with a Golden Globe nomination, and Sacha wants to thank Sarah by taking her as his date.

Deadline says Sacha was nominated for a Best Actor in a TV series Musical or Comedy Golden Globe this morning, which a lot of people took to mean there will be a second season (it could have been in the limited series category if it was a one-and-done thing…or not. Just as Big Little Lies). Sacha was grateful – especially to those he tricked in the show:

“This is such a special honour for me as the HFPA are always among the first to really appreciate my ever evolving humour. I am humbled to be recognised among such a wonderful group of nominees, all of whom I admire. This show was a labour of love for over two years. It is a shame they overlooked the amazing performances by the rest of the cast, particularly Dick Cheney and Roy Moore. Meanwhile Ms. Palin, despite being cut from the show, I hope you will accept my invitation to be my date for the ceremony.”

Dick and Roy may have made the final cut (along with this wacko), and Sarah came out early saying she had been duped into giving a “bizarre, really embarrassing, humiliating” interview. Alas, the only mention of her on the show was in the credits of the final episode when she was listed as “Special Publicity Consultant (Inadvertent).” I mean, they’ve already had Stacey Dash stink up the Oscars, so why not give the Golden Globes a right-wing looney of their own?! Sorry, Grammys. I guess you’ll get Ann Coulter.