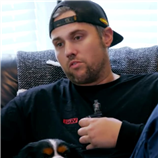 Ryan Edwards has a message for the the haters, trolls and disbelievers.

He also has a very clear message for rival Taylor McKinney, following an ugly clash between the reality stars on stage this week on part one of the Teen Mom OG reunion.

We all knew the special would turn vicious — but not even the most ardent viewer could have been prepared for all McKinney had to say about Edwards.

After a handful of episodes during which Ryan and his family (who have since been fired) argued with Maci Bookout and her husband about custody of Ryan and Maci’s 12-year old son, Bentley, McKinney simplly went off at the reunion.

“I think every week when you watch a new episode, you think Ryan can’t possibly be any dumber than he is, and he will prove you wrong the next week,” he said at one point.

“I mean, that guy can really show you how big a piece of s–t he really is.”

From there, Taylor addressed Ryan’s alleged bullying of Bentley, the son he shared with Bookout.

“Bentley is becoming a young man. I think he’s shown the Edwards that he’s found his voice. He can think for himself,” Taylor said.

“Ya’ll saw the clip. He sat there and called my wife a b–ch. In past seasons the things he’s done to Bentley, poking fun at him, making fun of him, calling him a cry baby.

“Enough is enough,” he continued, prior to addressing Ryan and calling him out:’

“Grow up and be a man. Don’t be a coward. Come sit out here and sit on the couch with us.”

As for the issue of Ryan’s sobriety, considering he’s been arrested many times and been to rehabn on multiple occasions?

McKinney, who previously said Edwards should be drug tested before spending time with Bentley, was asked if he thinks Ryan is clean.

“This is our opinion. It’s based on when he shows up to something or when you see him sitting there in a scene and he can’t hardly keep his eyes open.”

So there’s the backstory, there are the allegations that have been leveled against Ryan Edwards.

What does the father of three have to say for himself?

“I can see why he made the comment, but really I was just exhausted 99 percent of the time,” Edwards told The Sun after the reunion aired on MTV, outlining why he often looks so out of it:

“Staying up all night then helping Mackenzie with kids in the day. That’s in between going back to the garage building my buggy to try and get it done for King of the Hammers off-road race.”

Edwards who shares Bentley with Maci, along with Jagger, 2, Stella, 1, and stepson Hudson with wife Mackenzie.

He also builds and fabricates buggy cars for off-road races, something he’s even more focused on these days without an MTV paycheck in his future.

“There were many nights I would work so long, I would just sit down for 15-20 min in the shop and nap for that long and get back to it,” Ryan said to The Sun, adding:

“Imagine hand-building and fabricating everything you see on a car by yourself in a little less than a year.

“Covid ended up getting in the way too much and I didn’t get it done in time, but we will get there next year!”

Ryan previously told this same publication that being let go from Teen Mom OG was a “blessing in disguise.”

He’s trying hard not to sound angry or bitter.

“We are so happy that we are no longer doing it. This is the happiest I’ve been since before I started taking pain killers,” he said, referencing his past drug use.

“It makes me real happy to see my wife so happy so I couldn’t ask for much more.”

On the most recent season of this franchise, Bentley refused to see his dad until he agreed to go to therapy with him to work on their strained relationship.

Edwards trashed his ex as a “spiteful bitch” at one point in response to the drama and has said he believes Bookout got his family fired a “retaliation” after his father, Larry, fought with McKinney at the reunion.

“Maci is in fear that my mom and dad will start telling the truth,” he told The Sun.

“She will always fight to have us off the show.”