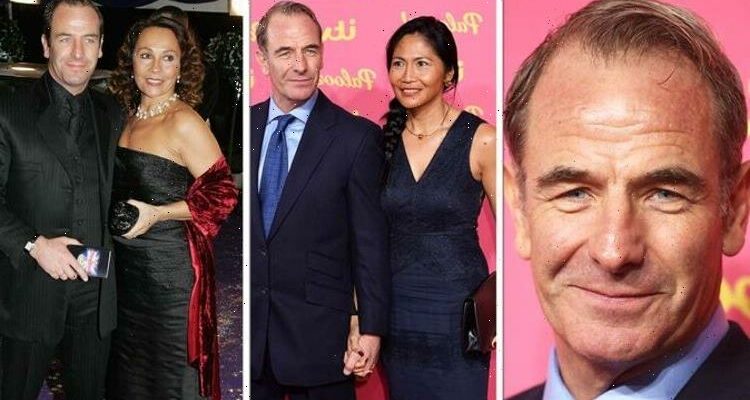 Grantchester: Robson Green reveals there’s a ‘secret’ under his hat

Robson Green, 57, will be back as DI Geordie Keating when Grantchester returns to ITV on Friday night. After more than 30 years in the spotlight, Robson’s private life has hit the headlines for a number of rollercoaster romances, including two marriages and an affair with a vicar’s wife.

The pair split eight years later when he reportedly had an affair with Pamela McDonald, who at the time was married to Emmerdale actor Ian Sharrock, who played Jackie Merrick for around 10 years.

Speaking about his love life at that time, Robson said fame caused him to “lose touch with what matters in life” and admitted his “relationships were a car crash”, he explained on ITV’s Robson and Jim’s Icelandic Fishing Adventure back in 2016.

The couple were divorced in 2013 on the grounds that their marriage had irretrievably broken down.

It was reported that they had lived apart for two years prior.

Addressing the situation at the time, Robson said he had not spoken to the former model since they split and only communicated through text message for the sake of their son.

He told Daily Mail: “Vanya and I just grew apart. I don’t blame it on the career. It’s just we were different and we didn’t develop together. My mind went in one direction, hers in the other.”

In 2016, it was reported that the Soldier Soldier star had run off with a vicar’s wife.

Robson and Zoila Short met at a gym, fell in love, and the Sunday school teacher “immediately” left her husband, Reverend Geoffrey Short.

The mother-of-two reportedly sat Geoffrey down in the vicarage of St Columba’s, in North Tyneside, and confessed: “I’m leaving you for Robson Green.”

The vicar, who had been awarded an OBE by the Queen, was left heartbroken by the affair and said that he even questioned his faith.

He explained to The Mirror: “We had a great life together. People thought she was the ideal vicar’s wife, and she was. She loves the boys and everyone said what a fantastic mother she was.

“Then I got home from work one day and all of a sudden everything changed. She announced she was leaving to live with Robson Green.

“She said they got talking in the gym and she fell in love. She left ­immediately. This all came as a huge shock to me.”

It is believed that Robson and Zoila are still together.

They were last pictured together at the ITV Palooza in 2019 and looked very much in love.

In 2020, Robson gushed that his “amazing” girlfriend loves to “put on waders” and go fishing in the River Tyne, which flows at the bottom of their garden.

He told the aforementioned publication: “When we have time, Zoila and I will put on our waders and cast a line for trout or salmon.

“She’s amazing. She was brought up fishing and really knows how to cook it too.”