Robin Roberts enjoys joking around with her Good Morning America co-stars, but didn’t expect it to go this level on a recent installment of the show.

MORE: Robin Roberts reveals partner Amber Laign had a ‘challenging week’ as she returns to GMA

The morning news host spoke to her colleague Sam Champion about the summer solstice and the ensuing onset of summer, talking of their seasonal essentials.

“Sam, I’ve been listening to you all morning, and you’ve been talking about the hats, the cocoa butter, but you didn’t mention a speedo,” she joked.

Sam and her other co-stars immediately burst out laughing as he then replied, in very revealing fashion: “Well, Robin, it is part of the very typical summer solstice kit and it is a gold lame one.”

MORE: Sam Champion stops viewers in their tracks with remarkable revelation about time with GMA

Immediately upon hearing the confession, the group started reeling, with a resounding note of exclamations going around and Robin even shouting: “My eyes, my eyes!”

Robin commented on Sam’s summer kit, to an unexpected response

She responded: “You just took it to the next level,” with Sam saying: “I can’t stop, Robin. I’m like a six-year-old at a birthday party.

“I’m exhausted now from all this summer solstice stuff this morning,” and his co-star simply began to give him a slow clap as she added: “Here’s a slow clap for you this morning.”

A fan even shared a clip of the exchange on social media, saying Robin “went there,” to which she responded: “Yes, I went there but Sam took it to another level!! Per usual!”

Many of her fans quickly fell into laughing fits just as much as the GMA stars did, with one of them commenting: “Omg, too funny. We missed seeing you two. Never a dull moment & yes Sam definitely took it to the extreme.” 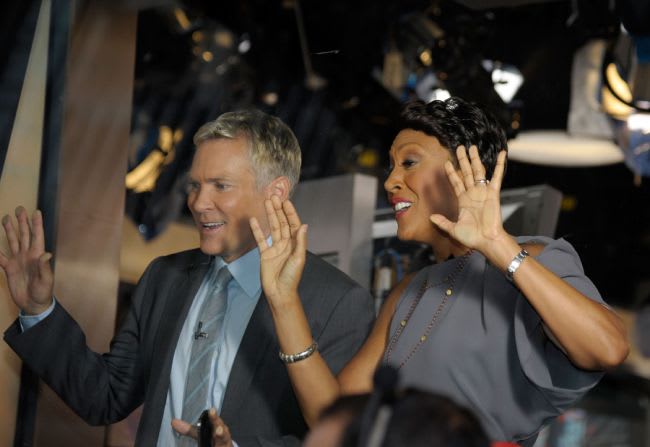 Another said: “I can’t unsee it…even in my mind. #GoldLameSpeedo,” with a third adding: “My imagination is running away with me right now,” and one sharing: “Good morning Sam, Robin, summer solstice, and that Speedo!!!! Anything to stay cool in these temperatures!”