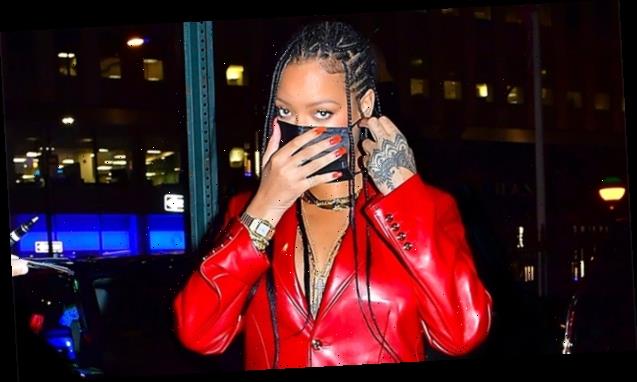 Rihanna surprised a fan at her own birthday dinner, and the sweet moment was captured on camera. The birthday girl’s friend revealed how the Fenty entrepreneur helped coordinate the surprise!

“Imagine Rih crashing your birthday dinner,” a fan wrote over a video that has now gone viral on Twitter. Yes, imagine: in the clip, Rihanna dances by a table celebrating someone’s birthday in a restaurant on April 6. The 33-year-old singer — who is looking like an icon per usual in a red blazer and ripped jeans — then approaches the table, phone in hand, and asks the guest of honor, “Is it your birthday?” The birthday girl (Samirah Abdullah) confirms it is, and is all smiles — as we would all be if Rihanna crashed our birthday dinner! The birthday girl’s best friend, Nini, revealed how she and Rihanna masterminded the ultimate birthday “surprise.”

“So we’re at dinner, right? And we see her, she’s sitting across from us,” Nini explained in a “Storytime” on her TikTok, @aupharee. So, she “walked up to her table” and asked if the Fenty entrepreneur could take a photo or say hi to her best friend. “She was like, ‘Go back to the table and say I said ‘no.’ But when the cakes comes out, I’m going to walk up to the table and surprise her.”

“So thats literally exactly what she did,” Nini continued, who gushed that Rihanna was so “nice” about the whole situation. “As soon as the cake was coming to the table, she followed our waitress,” Nini added. Not only did Rihanna make a surprise appearance by their table, she also took photos with the whole group and gushed how “beautiful” they all were, NiNi revealed. She was also happy to report that RiRi smelled so “good.”

Rihanna has been surprising many fans lately! She attended a march against Asian American and Pacific Islander hate in New York City’s streets on April 4, where she gave her Instagram handle to an unsuspecting fellow protestor. “That’s you?,” the protestor asked in confusion, after the phone loaded to @badgalriri’s page. “When Rih gives you her IG handle but you think she trolling,” Rihanna’s assistant Tina Truong, who is Vietnamese-American, wrote over a video of the amusing situation. You can watch that surprise go down as well in the video below.

When Rihanna’s not surprising fans, she’s hanging out with her beau A$AP Rocky. Two days before the birthday party surprise, the music collaborators and friends-turned-lovers were seen dining at the NYC hotspot Carbone!