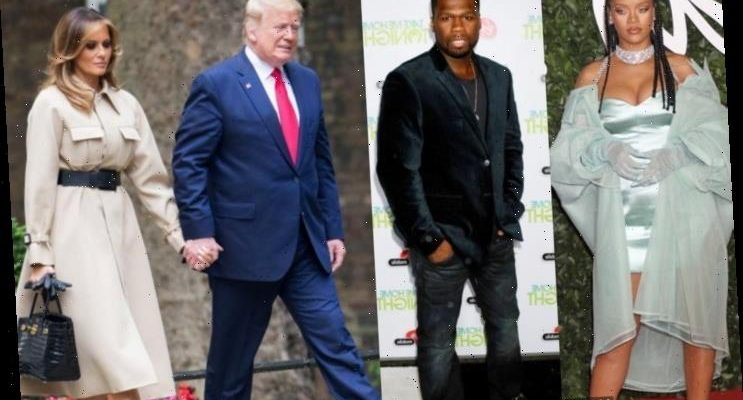 The ‘Power’ creator reposts the viral video and adds in the caption, ‘She don’t want to hold his hands,’ prompting Snoop Dogg to write in the comment section, ‘Tuff times.’

AceShowbiz –Rihanna and 50 Cent have joined thousands of people trolling Donald Trump after a video went viral of him trying to hold hands with his wife Melanie to no avail. Both celebrities took to their respective social media accounts to ridicule the president of the United States over the video.

For instance, Fiddy reposted the said video on his Instagram account along with the caption that read, “She don’t want to hold his hands. LOL.” Seeing his post, Snoop Dogg jumped to the comment section to sarcastically write, “Tuff times,” along with a broken heart emoticon. Rapper Jammer also chimed in, “Fam this is actually killing me. it’s been don’t so softly and calmly.”

Meanwhile, Rihanna got a little bit creative and added her own song, “Needed Me”, in the background. “I was good on my own, that’s the way it was, that’s the way it was/ You was good on the low for a faded f**k, on some faded love/ S**t, what the f**k you complaining for?” Rih could be heard singing as Melania climbed down the stairs without holding Trump’s hand at all.

“Melania likes art,” so the songstress wrote in the caption of the post, possibly referring to her previous photos in which she was seen showing off her art piece that had the words, “F**k Trump” written on it. At the time, the “Umbrella” singer received criticism from Trump supporters over the artwork.

Ronny Jackson said, “Painting ‘F**k Trump’ at Cadillac Ranch isn’t ‘art,’ @rihanna. It’s a total disrespect to our country. Here’s a ‘Wild Thought’: If you want to save your career by badmouthing @realDonaldTrump, maybe ‘work work work’ on a new strategy. Not going to fly here. Texas is TRUMP country!” Meanwhile, DeAnne Lorraine called her “the biggest failure in the music industry” and urged her to “appreciate the country that welcomed you!”