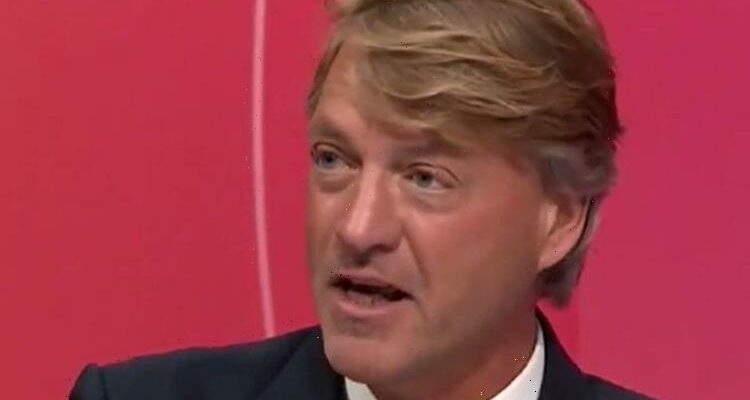 Brexit: 'The process is a mess' says Richard Madeley

Richard Madeley is just one of the star-studded names heading to Gwrych Castle this week. Alongside Louise Minchin, David Ginola and a host of other famous faces, Richard will face bushtucker trials and the biting cold winds North Wales has to offer. Good Morning Britain presenter Richard finally accepted the call from ITV bosses this year, having previously turned them down.

Speaking to the media ahead of this year’s series, he said: “It’s a great show and I don’t think I’ve ever missed a series.

“But I’ve always said to them, ‘I prefer to watch it than do it. Thanks very much.’ And it goes away again.”

He changed his mind this year, however, having put his “journalist hat on” and realised “it’s not just a television show”.

Richard made his name presenting Richard and Judy alongside his wife Judy Finnigan, as well as This Morning and other shows.

He is a self-confessed Remainer and previously expressed strong support for Tony Blair, but condemned Jeremy Corbyn in the Labour Party leadership elections of 2015.

In an unearthed video, Mr Madeley was discussing the need for proper leadership on Brexit while appearing on BBC Question Time in 2018.

He said the Government had spent far too much time “talking to themselves”, and said it was an “utter shambles”.

However, despite voting to remain in the European Union, he said staying within the customs union and single market would be wrong.

He said: “I don’t think that the 52 percent of people who voted to leave had a silent caveat in their heads when they put a tick in that box.

Speaking to a fellow panellist, he said: “Now, you may or may not be right that it could lead to economic disaster for this country if we leave them, but I’m sorry, this is a democracy. We took a referendum, 52 percent of people said we want to leave and that means leaving.”

Citing Theresa May’s infamous ‘Brexit means Brexit’ slogan, Mr Madeley said it was “obvious” what she meant by that. He said: “She meant that we were absolutely going to leave, hook, line and sinker.”

The Brexit process under Mrs May at the time, in June 2018, he said was a “mess”. Mrs May’s Government, he said, was “lurching from one holding operation to the next and the clock’s ticking.”

He warned Mrs May that it was time for “proper leadership” and a “proper acknowledgement that the people have spoken”.

He finished: “Let’s get on with it and make it work ‒ and I voted remain!”

The audience gave him a round of applause, clearly impressed with his rationale.

Mrs May later requested an extension to Article 50. An initial extension until June 30, 2019 was granted, before two further extensions were granted.

Meanwhile, the EU warned Boris Johnson on Friday that the Brexit deal is at risk if he decides to suspend the Northern Ireland protocol.

EU Commission vice president Maroš Šefčovič said at an event on Friday that the agreement is “intrinsically linked” to the Protocol.

Speaking ahead of crunch talks in Brussels, he said: “One cannot exist without the other.”

He did, however, express his gratitude at a “change in tone” from the UK Government.

David Frost warned in the House of Lords on Thursday that this alleged “change of tone” did not imply any softening of the UK’s position.

Mr Frost said Article 16, which allows the UK and EU to suspend any part of the Northern Ireland agreement that leads to “economic, societal or environmental difficulties that are liable to persist, or to diversion of trade”, remains “very much on the table”.

Richard Madeley stars on this year’s I’m A Celebrity… Get Me Out of Here! which begins on Sunday at 9pm.