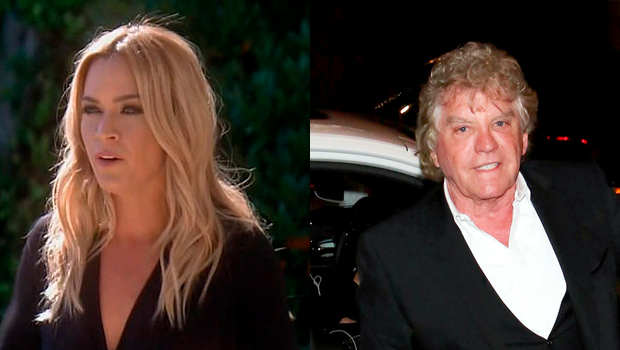 Teddi Mellencamp is now accusing Lisa Vanderpump of getting her involved in PuppyGate, saying that it was ‘something designed to hurt’ Dorit Kemsley. She took to Twitter to reveal new texts.

Teddi Mellencamp, 37, said she’s “not innocent” in this PuppyGate mess, after Ken Todd exposed her texts with Vanderpump Dogs events planner John Blizzard on the March 5 episode of Real Housewives of Beverly Hills. But she doesn’t think she’s alone, as she accused his wife, Lisa Vanderpump, 58, of manipulating her feud with Dorit Kemsley in this Season 9 story line! “John Blizzard called me to tell me the dog story at Lisa Vanderpump’s request, knowing that Dorit and I were in a bad place,” Teddi wrote in a blog post on March 5. “He tells me that Dorit would not call Lisa Vanderpump back and that Lisa wanted to text her ‘Teddi knows’ in an effort to get her to respond.”

Dorit had adopted a puppy, Lucy Lucy Apple Juice, from Lisa’s rescue foundation but had to give it away — unbeknownst to her, the next owner dumped the dog at a kill shelter. This wasn’t public knowledge immediately, and Teddi claimed LVP instructed her employee (John) to tell Teddi about Lucy Lucy Apple Juice’s unfortunate story. After all, Teddi already had beef with Dorit. To try and prove this, Teddi tweeted an alleged text from John, which was originally cropped for the episode. “But didn’t Lisa tell you to tell me?!” Teddi wrote to John, and he replied, “YES” then “idk.” Teddi shared another text, in which John allegedly wrote, “I’m just getting mixed messages…Like Lisa: tell her…Ken: don’t say anything!!!” In a separate tweet, Teddi also accused Lisa of lying “about your involvement” in PuppyGate.

Teddi won’t stand to look like the villain. In the season premiere of RHOBH, it was suspected that Teddi helped to orchestrate that awkward moment when the employee brought out Lucy Lucy Apple Juice for the camera, to LVP’s horror. “Have the dog there and I can say it looks like Dorit’s dog…Either way it will come out,” Teddi had texted John beforehand, as shown on the episode. But Teddi claimed there’s more backstory to that text, as she continued to write in Tuesday’s blog post, “I knew things were not as they seemed that day at Vanderpump Dogs which explains my hesitation at bringing the dog up. Please rewatch John Sessa’s reaction when LVP says ‘stop.’ That says it all. LVP was not playing to the scenario she had set forth…When LVP started with the ‘Teddi was gossiping’ stuff, I knew that this was all being twisted in my direction. We see in the scene with Dorit in the premiere episode that LVP was already laying the groundwork for this.”

Teddi regrets stepping into this mess at all, as she now accused PuppyGate of being a ploy aimed at Dorit. “I am now angry at myself for going along with something designed to hurt Dorit, especially when the dog’s well-taken care of,” she added in her blog post for Bravo. “I am also angry that LVP would play against my hard feelings with Dorit. That is why this has become about something other than the dog. Had Vanderpump just admitted she was upset with Dorit and wanted the story out there, this would all be put to rest.”