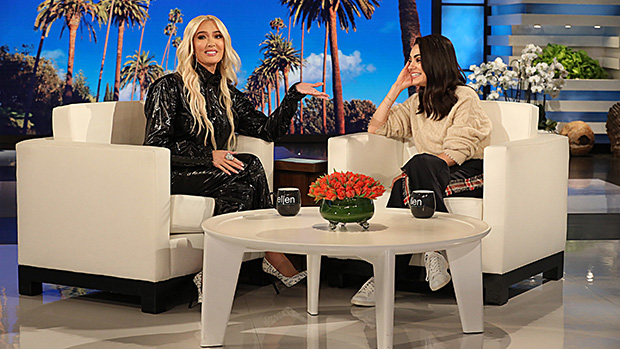 Mila Kunis got ‘RHOBH’s Erika Jayne to spill all the tea about the now infamous ‘PuppyGate’ storyline, while spilling secrets of her own! Both Mila and Erika revealed their opinions about Lisa Vanderpump’s presumed involvement in the drama!

Erika Jayne is setting the record straight about which side she falls on in the ongoing “PuppyGate” controversy on The Real Housewives of Beverly Hills. During an interview with actress, Mila Kunis, 35, who was filling in for Ellen DeGeneres, on The Ellen DeGeneres Show, March 25, the actress — who is a major reality television fan — grilled Erika, 47, about whether “PuppyGate” is real or not. “How much of the storyline over this puppy is genuine?”, Mila asked in a preview clip, to which Erika replied, “No one has ever asked me to do anything on my end, so it’s [genuine]… That’s why you’re seeing us gel together so hard as a cast this year.” The full interview with Erika Jayne will air on April 11.

“So this ‘PuppyGate’ thing really happened?”, Mila flat out asked. “Yeah it really did,” Erika confirmed. She explained: “Dorit [Kemsley] adopted a dog from Vanderpump dog center. The dog did not work out. Instead of returning it to the shelter, she found what she thought was a great home. That home, or that person, then took the dog to another shelter.” Loyal RHOBH fans will know that the “PuppyGate” dramatics hit its peak after Dorit Kemsley adopted a dog named Lucy Lucy Apple Juice from Lisa Vanderpump’s foundation.

Mila then chimed in and said, “But, that’s not where the drama started.” The actress went on to explain a hot button question many RHOBH fans had, after “PuppyGate” became a full-on controversy. “Did Lisa Vanderpump… manipulate somebody else to jump in an produce the drama?” Erika also added that Lisa “wanted the story out there.”

So, did Lisa Vanderpump really fuel the fire that became “PuppyGate”? — “In my opinion, yes. 100 percent,” Erika told Mila, who AGREED, before she hit the reality star with rapid fire questions. “Do you know if she’s quitting the show?”, Mila asked about Lisa, following rumors that she was fed up with the cast and wouldn’t film with them, especially after “PuppyGate”.

“I don’t know if she’s quitting the show, I know that she stopped showing up mid-season, so, we were stuck looking at each other, like, ‘What’s going on?’”, Erika revealed to a stunned Mila. Erika also added that she hasn’t spoken to Lisa, and that she’s completely on Teddi Mellencamp‘s side.

Where does Teddi come in? — If you haven’t caught up yet: Lisa’s dog foundation contacted Teddi, whose previously had beef with Dorit (important to remember), to tell her about what had happened with the dog Dorit adopted. Knowing Teddi and Dorit used to have beef, Teddi later confessed to Erika that Lisa attempted to frame her in the scandal. Teddi also admitted that she did engage in some “catty” back-and-forth with Lisa about the situation, therefore revealing her involvement.

“I’m on the truth’s side, and that’s the truth,” Erika said to Mila about Teddi. “I think she got cold feet and and she got caught and backed out last minute, but that’s not to give her… listen, it takes a lot for her to want to do something like that,” Erika said of Teddi’s confession about her involvement in “PuppyGate”.

Erika added that she’s unsure if Lisa will be back for the RHOBH reunion, which will take place in June. However, she did invite Mila to attend, and the actress went wild!