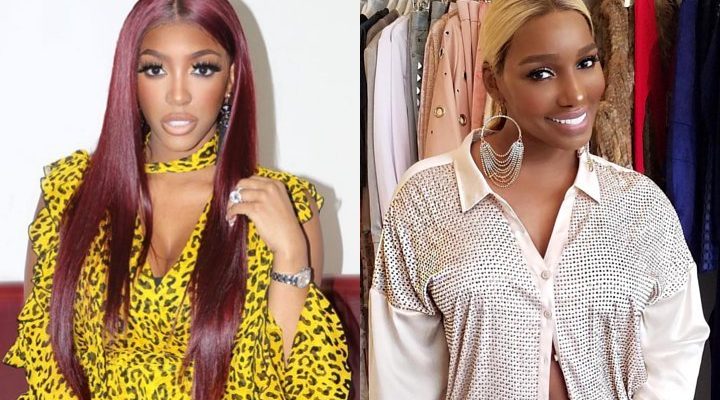 AceShowbiz –Porsha Williams and NeNe Leakes‘ feud is escalating as the two “The Real Housewives of Atlanta” stars are exchanging heated words on social media. The back and forth between Porsha and NeNe first came down after the former shared a screenshot of text messages which NeNe allegedly sent to her just 6 days after she gave birth to her and fiance Dennis McKinley’s baby daughter.

In the photo, NeNe was seen saying to Porsha, “You lying a** big fat hungry b***h! You know I never put my hands on you! Marlo [Hampton] Cynthia [Bailey] nor Kandi [Burrus] can EVER say that!” NeNe’s text continued to read, “You want an excuse for going in my closet without permission so you can talk yo fake s**t on IG all you want but remember my house is lit wit cameras!”

“Oh and don’t forget who was by your side & saved yo wack a** when u pulled Kenya [Moore] off that sofa,” the text continued. “Don’t forget nobody f***ed with u in San Fran or in Spain but ME! If u got something to say, say the truth because If I put my hands on you, you will know it. Oh and remember you had your hair flipped over yo thin bald spot! I have hair but if I don’t, I have enough money to buy all the wigs & extensions I want.”

Porsha captioned the photos, “This is what my so called ‘Big sis’ sent me last night 6 days after giving birth. @neneleakes is so miserable and ain’t happy for nobody. It’s not a contest I’m just living my life and being blessed.” She further wrote in the caption, “Yes I posted this since you wanna go on live and speak on me yet again & talk about these text I figured I’d let them see for themselves! #FatShamingANewMomShameOnYou #NonsupportiveEdglessbird #IsThisYourQueen.”

NeNe posted a screenshot of text she claimed she sent to Porsha after she gave birth. The text read, “Today your life changed! No matter where we are in our relationship, being a mother is a true blessing, and only women can bring life into the world!…That day in Destin, Fl when you said ‘you might be pregnant’ i was genuinely happy for you then and now.”

Captioning the photo, NeNe wrote, “@porsha4real This is what I sent you after you gave birth! I sent you text messages last nite after i saw on social media what you had said. I could have responded back on social media but i decided to text rather than do that!” She went on accusing Porsha of deliberately stirring a drama to gather attention ahead of her “3 episode commercial.”

Porsha didn’t hold back as she wrote in the comment section, “And that is why you are sick!” She went on slamming NeNe, “You started with me last night and now you play victim! It’s too hard being friends with you. I’m done… so Enjoy being exposed… talk about that on you closet special sis.”

The pair are feuding following the belt-gate which happened when NeNe had an outburst after a cameraman attempted to film Porsha and Kandi Burruss at NeNe’s secret closet. Porsha, who was pregnant at the time, alluded that NeNe assaulted her which caused her belt came off, though NeNe denied the allegations.

Just recently, NeNe accused Porsha of doing a voiceover of her scream during the ordeal. “On the show when she said, ‘I’m scared, get me out of here,’ she filmed that in the studio and did a voiceover and they put it in the show. So they got her to say, ‘I’m scared get me out of here,’ she said that in an interview in the studio and they actually inserted it in the show,” NeNe explained in her new video for her YouTube series “Life on NeNe!”.

Hitting back at NeNe’s allegations, Porsha wrote in the comment, “NeNe Leakes you are a bald edges lie! Nothing was taped and added. I said that the exact same moment you were assaulting people on camera. Just the same way Marlo [Hampton] yelled, ‘She’s pregnant.’ Now back to breastfeeding I go.”