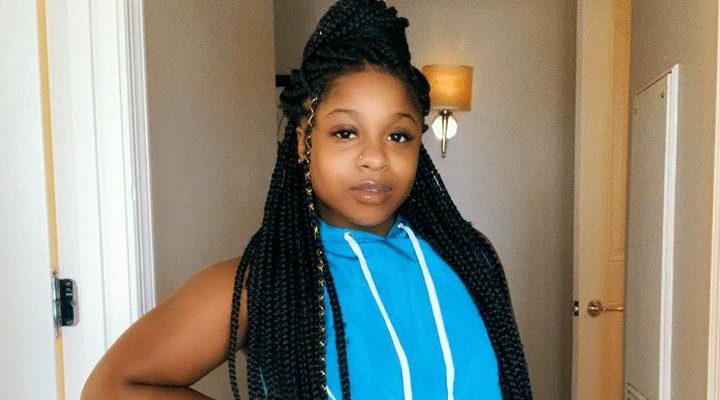 Taking to her Twitter account, the 20-year-old daughter of Lil Wayne tells her followers that she immediately left after learning of the cucumber activities at the infamous bash.

AceShowbiz –Reginae Carter has addressed the backlash surrounding her attendance at Trouble‘s cucumber-themed birthday party despite speaking out against the viral Cucumber Challenge. Taking to her Twitter page on Monday, August 5, the daughter of Lil Wayne apologized to fans and revealed the real reason why she was at the bash, and it had something to do with her ex YFN Lucci.

Admitting to not knowing what would happen at the bash, Reginae explained that she only went to the party to spy on Lucci. “Females , don’t act like you never did it . But when I heard about the cucumber activities , I left.” She elaborated, “Tbh , I’ve made myself look like a fool for this man and I apologize for allowing you guys to see it.”

In another tweet, the “T.I. & Tiny: Family Hustle” star promised to be more private about her life as saying, “Unfortunately, every move I make is publicized. I can’t control it . Imma try to be more private from now on . It’s hard because I’ve always been so open and honest . But I gotta learn how to deal with my problems alone and in private.”

Reginae landed in hot water after a video surfaced showing her arriving at the infamous party with her friend Zonnique after deeming Cucumber Challenge “degrading” and “dirty.” Many called the 20-year-old a “clown,” with one saying, “This is why Reginae is a [clown emoji] practice what you preach.”

Reginae spoke out against the challenge after she caught Lucci leaving a comment under a video of a woman doing the challenge. Holding an Instagram Live session, the “Growing Up Hip Hop: Atlanta” star said the challenge is “not cool,” before adding, “Anybody that’s promoting that and thinking that’s cool I don’t want to be nowhere near them. … They’re childish, they’re dirty and pathetic! That’s all I have to say.”