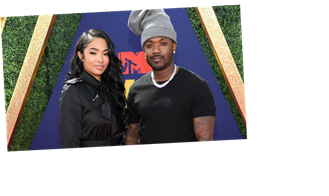 Ray J is still processing his decision to file for divorce from wife Princess Love. The 39-year-old singer filed for divorce on Monday, and in an interview with ET’s Melicia Johnson on Tuesday, he admitted he hasn’t “had a chance to sit back and think about it.”

“You know, I love her and I love my babies and it’s just personal, but she knows how I feel about her,” Ray J shared. “I just think that I want to make sure everybody is happy, that everybody enjoys life and that this can help her smile more and enjoy who she is and enjoy her life. You know, sometimes it’s the best thing to do.”

The reality star’s divorce petition came just two months after Princess requested to dismiss her own previous filing to end the couple’s marriage, which she filed in May. Ray J’s filing on Monday was seemingly an impulse decision, but done with his family’s best interests in mind.

“It was just how I felt at the time. I didn’t really talk to nobody about it,” Ray J confessed to ET. The singer went on, noting he would’ve gotten “too many opinions” if he had shared his plans to file ahead of time. “I just went to God.”

“It’s still so early, I really don’t know what’s going to happen, how it happens, but I just want to make sure that my babies and my Princess is in a great place mentally and that they can enjoy life,” he explained. “My wife, if there’s somebody better out there that she wants to be with, then I have to respect that as well. But hey, I don’t know… I can’t say too much, but I love you, Princess. That’s what I can say.”

While Ray J mentioned Princess potentially moving on with someone new, he’s also not closing the door on reconciling. After all, the couple — who share 2-year-old daughter Melody and 8-month-old son Epik — have done it before.

“Even if we don’t make it, we still have to be with each other a lot, because we have a baby, so we’re together for life. Happiness is important. I think. I’ll sacrifice all my happiness for my kids,” Ray J declared. “With that said, we’ll just have to wait and see [what the future holds], but I want to make sure that they’re in a good space, and that she’s in a great space throughout this journey as parents as well.”

“It’s important for us to be great parents first,” he said. “Then relationships flow after.”

Princess and Ray J’s relationship drama has frequently played out on social media. Last November, while pregnant with Epik, Princess told followers that she didn’t “want to be married anymore.” “I don’t have time for this. This is not love. And I’m done,” she said on Instagram, following her and Ray J’s drama over him allegedly leaving her stranded in Las Vegas.

At the time, Ray J denied her claims in a video in which he slammed her for taking their argument to social media. During an appearance on The Wendy Williams Showto tell his side of the story in December, Ray J said he was “done with Vegas” and ready to commit to being a better husband and father.

Fans have had a lot to say about Ray J and Princess’ back and forth, but he told ET on Tuesday that he hasn’t paid attention to the negativity.

“I haven’t looked at the internet or nothing. When something is going on like this, I don’t really look at what’s happening, I just kind of channel it out,” he revealed. “I’ve just blocked everything out and I’m just trying to stay focused on the work.”

According to the singer, he and Princess will still work together on their Zeus Network show, The Conversation.

“We still want to build our empire for our kids, and Princess is a really good executive producer. She really goes out and either makes sure we have the right talent or if there’s issues inside of the scenes, she’ll get on the phone and make everything go away, make everything right,” Ray J said, adding that he believes Princess has a “long career ahead” as an executive producer — and that he plans to support her along the way.

“I’m there all the way through for whatever projects we work on now. They do have a long life, so I will be on set and have some time with her, producing the shows,” he added.

In addition to The Conversation, Ray J has also been working on new music. His new song, “Hurt You,” drops Friday, and he describes it as a “love letter.”

“Sometimes when you’re in a relationship, everything piles up all at once, and then you end up at this place — this fork in the road,” he said. “That’s where I was, right there, so shout out to the team that put it together.”

“We’ve been working on a lot of different projects, from tech to television, but sometimes after you finish a long day at work, you come back to the studio. I practically live here — and I just gotta put some of my emotions into the music,” he added. “We had another plan to release another record but I said, ‘Before we even get to any record, I feel like this is a love letter that I got to get off my chest.'”