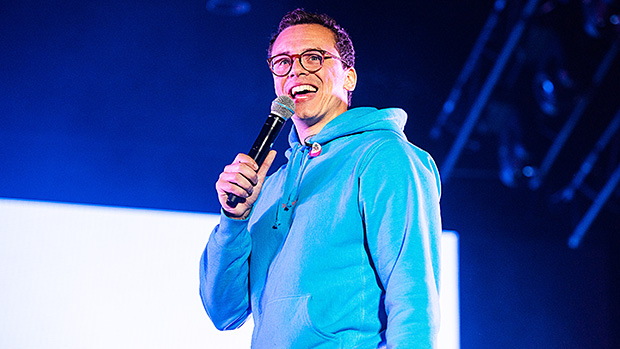 The rapper, also now a novelist, EXCLUSIVELY told HollywoodLife how his work has been a healthy channel for him through battles with anxiety and depression.

Logic’s list of accomplishments just keeps on growing. The rapper, singer and record producer is now also an author, and a best-selling one at that. After the release of Supermarket, the rapper’s first novel shot up to the Number One spot on Amazon’s best-selling books list, and Logic told HollywoodLife why he put pen to paper in an EXCLUSIVE interview. “I decided to write a book  because I just wanted to write and express myself in a different way, you know what I mean? Especially dealing with anxiety and depression,” he tells us.”And things I dealt with when I was a lot younger. I wanted to do it in a positive way. I didn’t want to turn to drugs and alcohol and try to drown my sorrows. And instead I wanted to try and understand the reasoning behind why I felt weird or why I was having anxiety or why I felt out of my body in a way and what I realized man it all comes down to mental health, eating correctly, drinking a bunch of water and taking care of your body. I used to be 130 pounds you know what I mean and now I work out regularly but just to be healthy. I am not trying to ‘Arnold Schwarzenegger’ it! I want to deal with my problems and my demons head on,” he says.

For Logic, the chance to inspire others through his story-telling is one of his biggest hopes. “I mean, I would hope that it inspires others but the biggest thing for me is hoping that it would inspire them to yes deal with their issues, but also to create,” he explains. “I never wrote a book before, I didn’t graduate high school you know what I mean? I don’t have a doctorate or anything and I decided to say, ‘Hey I am going to do this because I can!’ And I am so happy I did,” he happy says. “It is the number one New York Times Best Seller two weeks in a row… One hundred twenty thousand copies sold. Boom baby, believe in yourself!”

Of course, the 29-year-old star is a rapper first and foremost, and he was sure to give us an update on his new music. Logic has been in the studio prepping his next album, Confessions Of A Dangerous Mind, and it sounds like it’s going to be an ode to the digital age. “Fans can expect references to social media, that is a big thing,” he reveals. “Because I think social media is amazing. I think it is awesome and I wouldn’t be here without social media but at the same time, it can be a negative place man. It’s a place where people want to say hurtful things whether you’re famous or not or this and that and bully you…and it has even made me sad,” he confesses. “Imagine thousands of people are talking trash about you right now. That is kind of a sad thing. So, I talk about where we are and where we are headed and where hopefully we can end up as far as peace goes, and dealing with that,” he says, before adding: “there is some dope ass raps on there too!”

Logic’s best-selling book, Supermarket, is available now. Plus, fans should be sure to keep their eyes peeled for his 2019 album – coming soon!