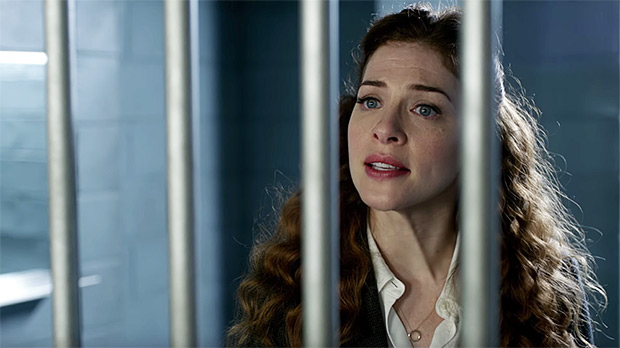 Madeline goes off in court over a corrupt detective in this EXCLUSIVE preview of the March 15 episode of ‘Proven Innocent.’ She lands behind bars after the judge holds her in contempt of court.

Madeline Scott has had enough of corrupt detectives, and she lets the judge know it. “Put me on the stand. I’ll tell you what happened or better yet call the corrupt police who continue to harass and intimidate my witnesses,” Madeline says in our EXCLUSIVE preview of the March 15 episode. “That includes and is particularly directed to Detective Falcone and his flunkies who seem to conveniently have the legal system just wrapped around their fat little fingers. It’s absolutely outrageous. You know what? You people make me sick.” The judge tells Madeline that he’ll hold her in contempt if she speaks one more word. Madeline refuses to stop. “Yeah, well, I hold you in contempt,” she quips.

The move lands her in jail. It doesn’t take long for Easy to stop by her cell. Madeline admits that a part of her relaxes behind bars. After all, she did spend 10 years of her life there. Easy brings up Madeline’s fight with the judge earlier. That judge is one who still believes Madeline and Levi killed Rosemary. “He’s also a misogynist pig,” Madeline says.

Madeline knows that Falcone is just going to keep paying off witnesses until they do something about it. She wants to take down Falcone. “Let’s expose him for the corrupt cop he is,” she says. Madeline notes that it’s likely dozens of Falcone’s wrongful convictions would be tossed out if they took him down. Easy knows it’s going to be difficult to bring Falcone down. It’s going to take an IAD investigation. Madeline just needs one case or one strong witness to destroy Falcone. “You want to start a war,” Easy says to Madeline. She replies, “We’re already fighting the war, Easy. Let’s friggin’ win it. I just need you to post my bail first.” Proven Innocent airs Fridays at 9 p.m. on FOX.