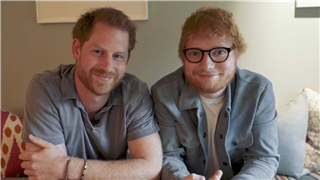 Two girl dads thinking out loud! Prince Harry and Ed Sheeran got a chance to chat about fatherhood on Wednesday at the 2021 WellChild Awards. Harry, who has previously served as a royal patron of the charity, made a surprise appearance at the private event at Kew Gardens in London — his first in-person appearance since returning to the U.K.

The two ginger Brits both recently welcomed baby girls — Sheeran is now dad to 10-month-old daughter Lyra and Harry welcomed daughter Lilibet with his wife, Meghan Markle, in early June — and spoke about the experience at the charity event.

“Congratulations, a girl right?” Sheeran asked the Duke of Sussex (via Hello! magazine). “We just had a little girl ten months ago now. You’re still in the trenches now! How do you manage with two?”

2021 WellChild Award winners met our Patron The Duke of Sussex and a host of celebrity guests, including @[email protected]@[email protected] & @AbbieQuinnen. They were also treated to a special performance from the brilliant @annemarie. pic.twitter.com/3JmxWScE2i

Harry and Meghan are also parents to 2-year-old son Archie. So far, Harry thinks little Lili is taking a backseat role to her toddler brother.

“We’ve been lucky so far, she’s very chilled and seems happy to just sit there while Archie is running around like crazy,” he shared with another guest.

Harry also addressed the attendees as a group, sharing, “Now as a father of two, I feel all the more connected, inspired and in awe of the resilience of these families, who power through indescribable challenges with the support of WellChild.”

Watch the highlights from the 2021 #WellChildAwards, in association with @gsk.

Yesterday The Duke of Sussex met our inspirational winners at a garden party at @kewgardens. Lots of fun was had after what has been a very difficult year for these children, young people & families. pic.twitter.com/MEdZENzQdb

Harry is currently in the U.K. to join his brother, Prince William, to unveil the statue of their late mother, Princess Diana, at Kensington Palace on Thursday, which would have marked her 60th birthday.

“I’m just so glad we can do it on what would have been her birthday, we weren’t sure we would be able to,” Harry told another guest at the event.