On Monday, palace sources told The Sun that the siblings were joined by their father Prince Charles at Windsor Castle after the royal family laid the Duke of Edinburgh to rest.

Rumors of a royal reconciliation have sparked after witnesses spotted William, 38, and Harry, 36, walking together and chatting. It was the first time the two have been together in public since Harry stood down from royal duties and moved to the U.S. with his wife Meghan Markle and their son Archie in early 2020.

“It’s early days but you’d hope this is exactly the first step Philip would have wished for,” the source claimed to the outlet. 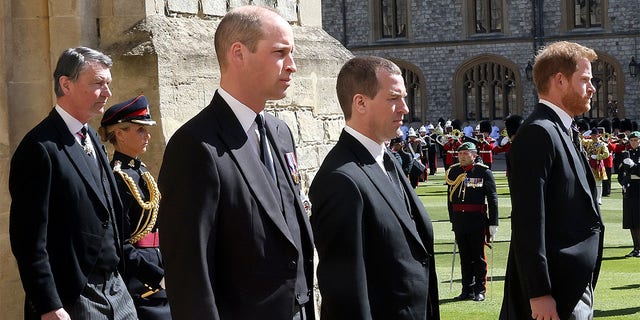 Vice-Admiral Sir Timothy Laurence, Prince William, Duke of Cambridge, Peter Phillips, Prince Harry, Duke of Sussex follow Prince Philip, Duke of Edinburgh’s coffin during the Ceremonial Procession during the funeral of Prince Philip, Duke of Edinburgh at Windsor Castle on April 17, 2021, in Windsor, England. Prince Philip of Greece and Denmark was born 10 June 1921, in Greece. He served in the British Royal Navy and fought in WWII. He married the then Princess Elizabeth on 20 November 1947 and was created Duke of Edinburgh, Earl of Merioneth, and Baron Greenwich by King VI. He served as Prince Consort to Queen Elizabeth II until his death on April 9, 2021, months short of his 100th birthday. His funeral took place on Saturday at Windsor Castle with only 30 guests invited due to coronavirus pandemic restrictions.
(Photo by Chris Jackson/WPA Pool/Getty Images)

“It is not known what was said behind closed doors and when the cameras were turned off, but it’s unfathomable to think Megxit and Oprah did not come up,” the insider alleged. “Harry and William appeared cordial as the cameras rolled and that seemed to pave the way for Charles to join them when everyone had left.”

According to the outlet, their grandmother Queen Elizabeth II retired to her private apartments with Lady-in-Waiting Susan Hussey immediately after the service.

Tensions between the brothers came to the fore after the Duke and Duchess of Sussex gave a bombshell interview to Oprah Winfrey last month. The couple portrayed the royal family as indifferent to Markle’s mental health struggles. Harry also described his relationship with William as “space at the moment.”

“There is a lot to be unraveled here,” royal biographer Penny Juror explained. “This is a falling out that has gone on for a long time. They need the time, space and the trust.” 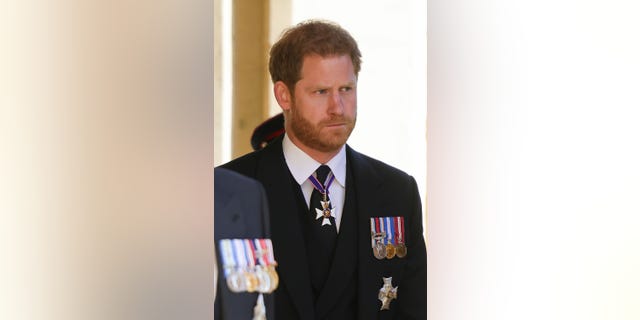 Prince Harry flew to the U.K. for his grandfather Prince Philip’s funeral. His wife Meghan Markle, who is expecting the couple’s second child, stayed behind in California due to doctor’s orders.
(Photo by Chris Jackson/WPA Pool/Getty Images)

“Harry should stay for the queen’s birthday [this week] as it is the least he can do for his grandmother and it gives him even more opportunity to talk to his father and his brother,” Juror added.

Rumors of a rift between the brothers — William, the heir, and Harry, the “spare” — have rumbled at least since 2019. That’s when Harry and Markle, 39, separated from the Royal Foundation, originally set up as the brothers’ joint charitable venture, to set up their own platform. That year, Harry said he loved his brother dearly but they were “on different paths” and have “good days” and “bad days.”

Many believe that William was angered and hurt by Harry’s decision to speak so publicly about the royal family’s issues during the Winfrey interview. In one explosive allegation, the couple said a family member — not the queen or Philip — had expressed “concerns” about Archie’s possible skin color before he was born. Markle, a former American actress, is biracial.

Days after the interview aired, William insisted “we are very much not a racist family,” and said he had not spoken to Harry since the broadcast. 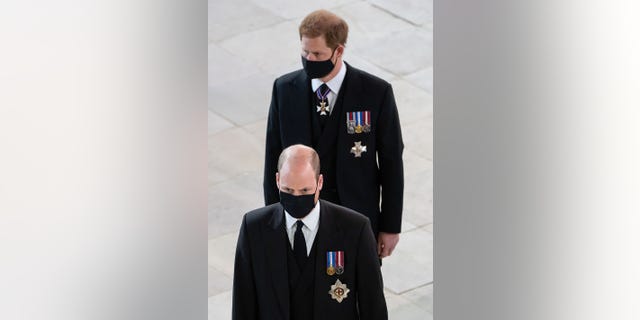 Prince William (front) and Prince Harry put aside their tensions to say goodbye to their grandfather Prince Philip. The Duke of Edinburgh passed away on April 9, 2021, at age 99.
(Photo by Danny Lawson – WPA Pool/Getty Images)

On Saturday, William and Harry walked in silence on either side of their cousin, Peter Phillips, as they joined other senior royals in Philip’s funeral procession. At one point Phillips fell behind slightly to allow the brothers to walk side by side — a visual echo of the moment the pair, as boys in 1997, walked behind the coffin of their mother Princess Diana in another royal funeral televised around the world.

The brothers sat opposite each other in St. George’s Chapel for the funeral, which was attended by only 30 people because of coronavirus restrictions. While William sat next to his wife Kate Middleton, Harry was on his own because the Duchess of Sussex is pregnant with their second child and was advised by her doctor not to make the long trip.

Afterward, Harry, William and Middleton, 39, strolled together outside the chapel. Moments later, the brothers walked together alone while Kate spoke to Zara Tindall, another of the reigning monarch’s eight grandchildren who is William and Harry’s cousin. 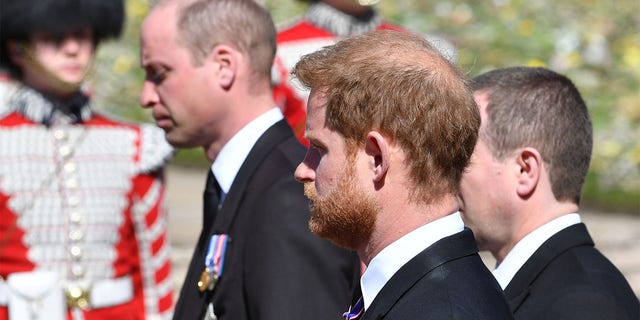 It’s unclear whether the passing of their grandfather will help the brothers heal their rift. It wasn’t immediately clear how long Harry, who has been self-isolating in line with the U.K.’s coronavirus restrictions since arriving from California early this week, will stay longer in his home country.