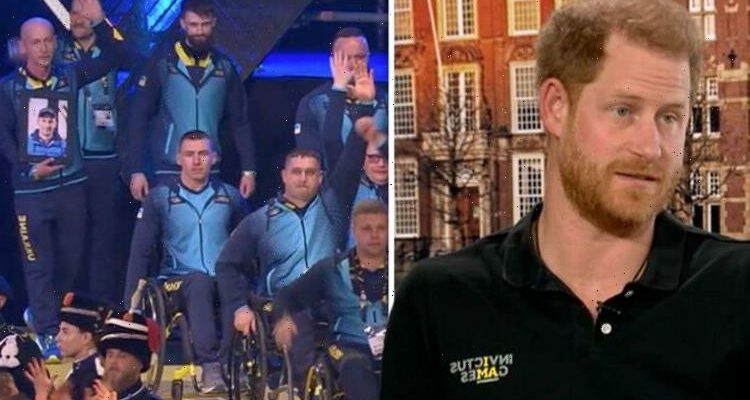 Prince Harry praised the “extraordinary” Ukraine team at the Invictus Games, revealing the sad news that four members had been killed in action amid Russia’s invasion of the country. One was their archery coach, Dmytro Sydoruk.

The Invictus Games, a sporting event which brings together wounded, injured and sick servicemen and women, is currently being hosted in the Netherlands.

Teams from 17 different countries are taking part, comprising both serving personnel and veterans.

The Duke of Sussex began the opening ceremony with a tribute to Ukraine.

“It’s not a full team, does that make this year’s games more poignant than ever?” asked Alex.

“I think what people need to remember, or perhaps don’t even know, is the vast majority of the Ukraine team were serving in some shape or form.

“So they removed their uniforms, put their team strips on, jumped on their coach, came over here, slept for a couple days, tried to decompress and then were straight into it – and they have to go back.

“So to have them here is extraordinary, that commitment they have made to leaving their country, which is a real hard thing for them to decide to do, but it came with their president’s blessing, and I don’t think these games could have been the games it is without Team Ukraine.

“And of course, they have lost now four members of their community, one being their archery instructor, who isn’t here, he didn’t make it, killed in action.

“It really brings it home, what is going on across Europe right now,” he added.

Harry was also quizzed on his recent trip to Windsor Castle with wife Meghan Markle, where he met the Queen.

He told BBC viewers the monarch would “love” to attend the sporting event “if she could”.

Alex asked: “Now on the way here you popped in to see Her Majesty The Queen, did she have many nice messages for Team UK?”

Harry replied: “She had plenty of messages for Team UK which I’ve already passed on to most of them, so it was great to see her and I’m sure she would love to be here if she could.”

It is the first time he and Meghan have been in Britain together since quitting their roles as senior royals in March 2020.

The couple now live in California with their young son Archie and 10-month-old daughter Lilibet, the latter of whom hasn’t yet met the Queen.

Harry, who missed Prince Philip’s Westminster Abbey memorial service on March 29, had promised ­he would see the Queen “as soon as possible”.

During the rest of the BBC interview, JJ said: “Obviously your wife is here, the Duchess of Sussex I should say, how is she enjoying it so far as she is very much part of this family now isn’t she?”

But the Duke pointed the question towards Gillian, who told viewers Meghan was “incredibly genuine”.