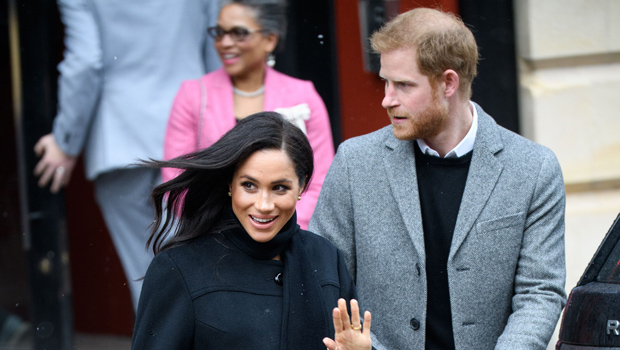 Prince Harry and Meghan Markle had the best reaction when a British boy suddenly swore in front of them during their visit with local kids from Bristol Old Vic’s outreach program on Feb. 1.

Prince Harry, 34, and Meghan Markle, 37, were left in utter shock when a young boy totally dropped the F bomb in front of them during their visit to Bristol on Feb. 1, and their hilarious reactions proved it! The Duke and Duchess of Sussex were visiting with kids who attend a workshop that’s part of Bristol Old Vic’s outreach program when the memorable encounter took place. The boy was talking to them about his experience with the theater when the sudden f-bomb casually came out of nowhere. “When you’re on the stage, you can’t be like, you know, f***ing around on the stage,” he explained. It didn’t take long for the parents-to-be to react in the funniest ways. Meghan let out a giggle after initially raising her eyebrows, and Harry couldn’t help but grin and act goofy as he pretended to balance himself.

Fans on Instagram were thoroughly entertained by the royal couple’s reaction to the boy, and they shared their opinions on their cute responses. “When the little boy suddenly said ”f***ing around the stage“ 😂 Meghan’s reaction! Hilarious! 🙈,” one fan posted. “He was stunned for a moment like Meghan. She let out a little giggle and he started acting goofy. I think they didn’t want to embarrass the kid,” another wrote. “Hilarious! Just shows that he was comfortable being himself around the duke and duchess. 🙌👏 And I love that it really didn’t phase Harry,” a third follower shared.

Harry and Meghan’s cute reaction is definite proof that these two are doing well in preparing to have their own child! Earlier in the day, the duo met with other Bristol children who were patiently waiting with adults to greet them outside in the snow. Both Harry and Meghan graciously shook hands and spoke with the crowd, including some very young tots. “Are you nice and warm in here?” Harry asked an adorable kid all wrapped up in a thick snowsuit. The son of the late Princess Diana, also took the time to meet and speak with a boy named Iestyn Jones, at Bristol’s Empire Fighting Chance charity. Like Harry, Iestyn also lost a parent, and when Harry learned of this, he had everyone else leave the room for a few minutes so he could speak with and comfort Iestyn alone. Iestyn, who lost his dad seven years ago, became emotional during his time.

“The same thing happened to me,” Harry told Iestyn during the 10-minute chat. Iestyn, who is from Kingswood near Bristol, spoke to reporters after the inspiring moment. “It just got a bit emotional because he mentioned something. He knew some stuff about me and the same thing happened to me,” he said. “We had a chat for about 10 minutes. When we had a group picture at the end he made sure I was standing next to him. They were lovely people. I didn’t expect them to be like that. They were amazing people.”

With all these cute and touching moments Harry and Meghan are having with kids, we can’t wait to see them interacting with their own bundle of joy! Their first child is due in late April.