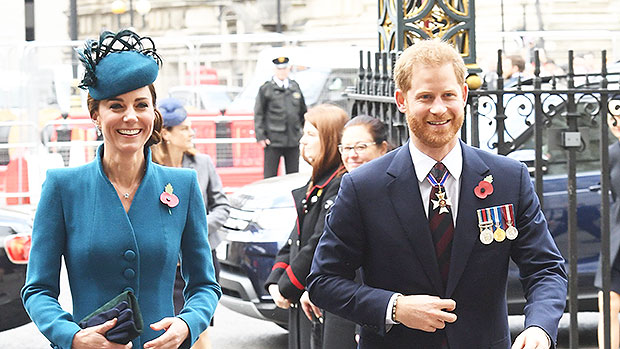 Feud? What feud? Prince Harry made a surprise appearance at the Anzac Day service in London on April 25 and he was all smiles with his sister-in-law Kate Middleton.

Prince Harry, 34, and Kate Middleton, 37, appeared to put to bed any rumors of a feud between the Cambridges and the Sussexes on April 25 when they both attended the Anzac Day service in London. The mom-of-three and the father-to-be arrived at Westminster Abbey smiling and chatting away with no signs of awkwardness or coldness, as rumors continue to swirl that relations are tense between Harry and his brother Prince William, 36, and Kate and her sister-in-law, Meghan Markle, 37.

Neither the heir to the throne nor the pregnant Duchess of Sussex attended the service, which is an annual tradition that pays tribute to the Australian and New Zealand soldiers who lost their lives during the tragic landings at Gallipoli, Turkey during the First World War in 1915. Prince William marked the day in New Zealand, during his official visit to the country. Meanwhile, Meghan is due to give birth to her first child any day now. That’s why – according to Rebecca English, the Daily Mail’s royal correspondent – Prince Harry’s name wasn’t even printed on the order of service. “I’ve been told: ‘He is pleased he can attend today’s Service, as planned. ‘With their baby due, his name was not printed in the programme [sic] in case he was unable to do so,’” she tweeted, adding, “Suggests no sign of #BabySussex quite yet, then!”

The royal family has been faced with negative media about relations between the Duke and Duchess of Cambridge and the Duke and Duchess of Sussex for months. Rumors of a rift between the couples have filled newspapers and magazines on both sides of the Atlantic and hit fever pitch when Harry and Meghan left London’s Kensington Palace (where William and Kate live with their three children) to set up home at Frogmore Cottage in Windsor on April 4.

While numerous outlets have claimed that Meghan and Kate don’t get along, Vanity Fair alleges that it’s the brothers who have fallen out. “Kate and Meghan are very different people and they don’t have a lot in common but they have made an effort to get along,” a source told royal expert Kate Nicholl in a piece she penned for the magazine. “Any issues are between the brothers.” If these new pictures of Harry and Kate are anything to go by, the brother and sister-in-law appear to get along just fine.