Prince George, Princess Charlotte and Prince Louis started at Lambrook School this week, on the same day that their great-grandmother, the Queen, sadly passed away.

The children are now expected to be undergoing a change for them following the news as new titles get passed on. Prince William and wife Kate will be known as the Prince and Princess of Wales instead of the Duke and Duchess of Cambridge, and the children will also carry this title over.

WATCH: How Britons are paying tribute to the Queen

Members of the royal family don’t have any use for last names, and as such they use their title when required to for forms, such as school registers.

MORE: How the Cambridge children could follow in Meghan Markle and Prince Harry’s footsteps

During their time in school, the royal children were known as George Cambridge, Charlotte Cambridge and Louis Cambridge, but this will now change to Wales.

This isn’t the only title change, as Charles is now known as King Charles III, with his wife Camilla being known as the Queen Consort.

It is also thought that Prince Edward, Charles’ younger brother will inherit their father’s title, the Duke of Edinburgh. 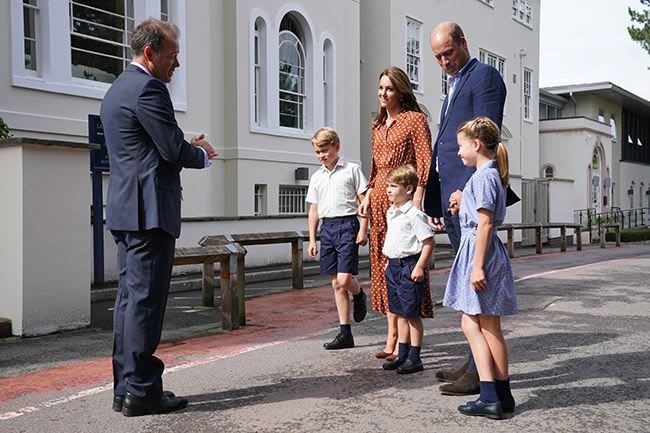 The change comes as they start a new school

One question that has arisen following the death of Her Majesty has been whether the young children will be present at their great-grandmother’s funeral.

They weren’t present at the funeral of their great-grandfather, Prince Philip, but at the time, the United Kingdom was under strict ‘phase two’ coronavirus restrictions, and the funeral was limited to just 30 people.

Had there been no such rules, many of the Duke’s great-grandchildren would most likely have been present at the funeral, just as they were at his Memorial Service held at Westminster Abbey on 29 March this year.

There is no official rule that states children are forbidden from attending the funeral of a Sovereign, though the youngest royals may be permitted to stay at home given the emotional gravity of the historical day.