Looks like Riverdale star Madelaine Petsch just kinda-sorta-maybe hard launched her new boyfriend on Instagram in the middle of a casual photo dump. As Just Jared was the first to notice, one of the photos in Madelaine’s roundup is her getting cozy with Anthony Li (who is one of Halsey’s managers). And yep, he commented on this post, writing “thank you for representing the diversity in my photography ability between slide 1 and 3.”

Also, they appear to have been photographed together in Paris around the time this photo was taken in October (though Anthony is not named on Getty Images): 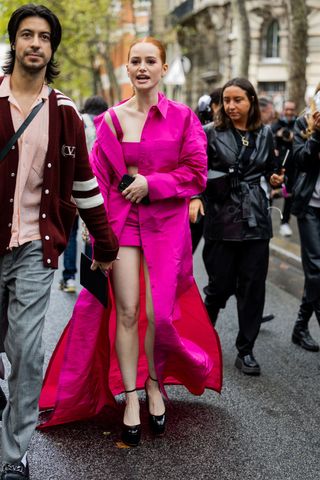 Anyway! On top of what looks to be a cute new ‘ship, Madelaine has a lot to look forward to career wise—specifically her upcoming Christmas movie Hotel for the Holidays, which seems supremely cozy. And let’s also not forget that the final season of Riverdale is expected sometime in 2023, and Madelaine told Entertainment Tonight that it’ll be wild.

“I’ve learned with Riverdale that we really lean into what the least expected route is,” she said. “That’s kind of what it’s always been. So I’ve gotten more comfortable with just going with the flow on the show because I really don’t know if I’m going to be on wires in the middle of the night [or] fighting a comet the next day.”

She added, “The words are insane, what we do is insane and we all lean into it and I get to do it with my best friends. With the end of that chapter coming to the beginning of my near future, I’m just mostly looking forward to what I have to do next and also going to miss my best friends.”