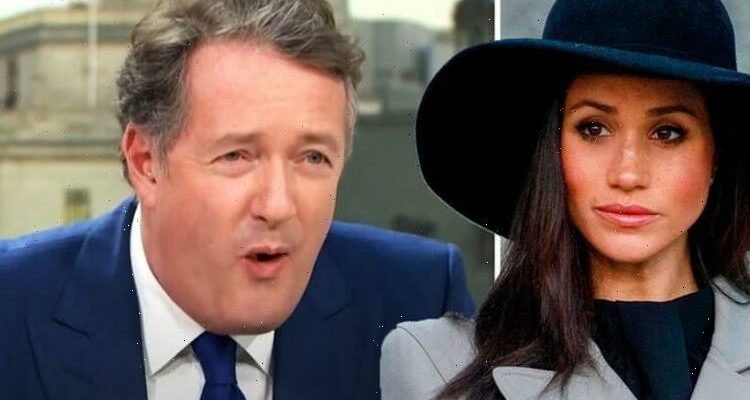 Piers Morgan thanks US for taking back Meghan Markle

Former Good Morning Britain host Piers Morgan has reignited his row with Meghan Markle a year on from exiting the popular ITV programme, after publicly disagreeing with claims she made during her landmark interview with Oprah Winfrey. The ex-Life Stories star, 57, told how his views on the Duchess of Sussex haven’t changed since he said he “didn’t believe a word Meghan said”, following her tell-all interview with Oprah Winfrey last year, which resulted in him leaving his position on GMB.

Speaking at a press event ahead of the launch of his TalkTv show Uncensored, Piers told how his view on the Duchess of Sussex hasn’t changed.

“I think almost everything that comes out of our mouth is complete b******t.”

However, the star went on to take issue with the fact that his co-host Susanna Reid was allowed to voice her opinion on Meghan’s comment, while he wasn’t.

Piers explained: “But whether you agree with me or not, doesn’t matter.

“Susanna Reid, on that same show where I got into all the trouble, she was saying the complete opposite.

“Well, why is she entitled to believe her, given how many lies were coming out of Meghan Markle’s mouth?” he asked.

He went on to add that he couldn’t “understand” why he was censored from voicing his opinions on the Duchess of Sussex’s claims.

Piers’ comments come after he stormed off the GMB set after being criticised for his comments towards Meghan by his co-star Alex Beresford.

In the interview, Meghan claimed to have experienced mental health struggles while pregnant with her son, Archie.

Addressing the Duchess of Sussex’s comments the next day, Piers passionately refuted the claims.

He said: “I’m sorry, I don’t believe a word she said, Meghan Markle.

“I wouldn’t believe it if she read me a weather report.”

Piers went on claim that Meghan’s behaviour has been “shameful”, writing: “We’re talking [about] someone who was on national TV in America, trashing our royal family, trashing the monarchy, humiliating the Queen, all while Prince Philip was seriously ill, and then later died.

“I thought it was utterly shameful, totally disgraceful.

But despite the record-breaking number of complaints about Piers’ comments, they went on to ultimately clear the former newspaper editor of breaching the broadcasting code.

Following the update, Piers took to Twitter to reveal that he stood firmly behind his remarks.

He told his nearly eight million followers: “I’ve had time to reflect on this opinion, and I still don’t. If you did, OK. Freedom of speech is a hill I’m happy to die on.”

Uncensored airs on TalkTV on Monday 25th April at 8pm.