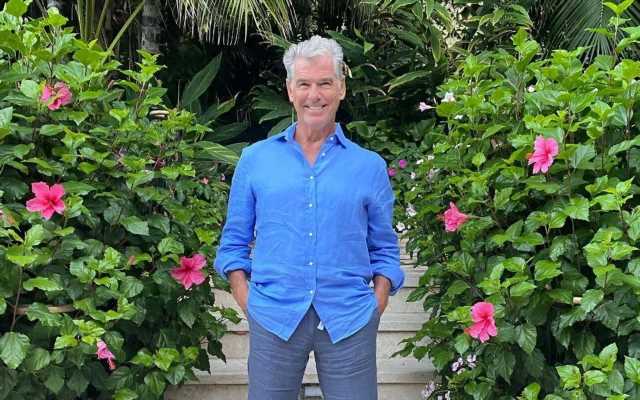 The former James Bond actor congratulates his son and wife in a warm Instagram post after the couple welcomed a baby boy, who becomes the star’s fourth grandchild.

AceShowbiz -Congratulations are in order for Pierce Brosnan as he has become a grandfather for the fourth time. On November 12, the former James Bond star’s son Sean and his wife Sanja have welcomed a baby boy named Jaxxon Elijah Brosnan into the world.

“Jaxxon Elijah Brosnan, born 3:06pm 11/12/22… all good blessings to you my dearest grandson, welcome. Congratulations my darling Sean, Sanja and Marley. Peace be with you,” the “Black Adam” actor wrote on Instagram to Introduce the new member of the Brosnan family.

Jaxxon is a sibling to the couple’s seven-year-old daughter Marley May Cassandra. The 69-year-old Irish star is also grandfather to Isabella and Lucas, his late daughter Charlotte’s two children.

Pierce previously admitted he still has “dark, melancholy” days after losing both his wife and daughter to ovarian cancer. The “GoldenEye” star’s first spouse Cassandra passed away in 1991 from ovarian cancer and, in 2013, Charlotte died from the same disease at the age of 41, and he isn’t a particularly optimistic person as a result.

Pierce said, “I don’t look at the cup as half full, believe me. The dark, melancholy Irish black dog sits beside me from time to time.”

The actor – who adopted Cassandra’s children Charlotte and Christopher, 50, and also had son Sean, 39, with her, and is also father to Dylan, 25, and Paris, 21, with wife Keely Shaye Smith – only met his own father once when he was 31, and so had no one to learn “fatherly instincts” from.

He said in 2017, “I know what it’s like to bring up sons and it can be a very arduous road. My fatherly instincts are purely my own. They relate back to no one, because there was no one.”