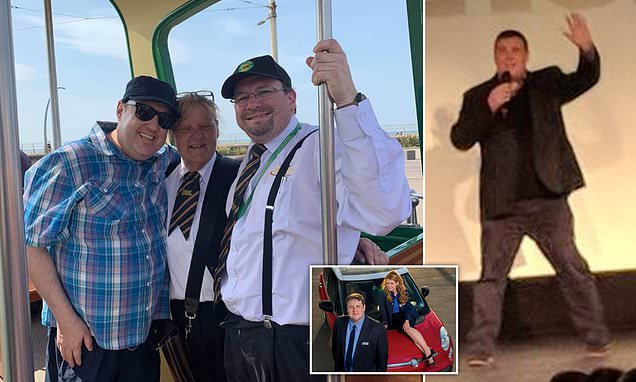 Peter Kay was pictured on a tram in Blackpool on Easter Monday – for the first time in a year.

The comedian, 45, made the rare appearance as he posed alongside staff members of Heritage Tram Tours –  grinning with the driver and conductor and posing for a photo. 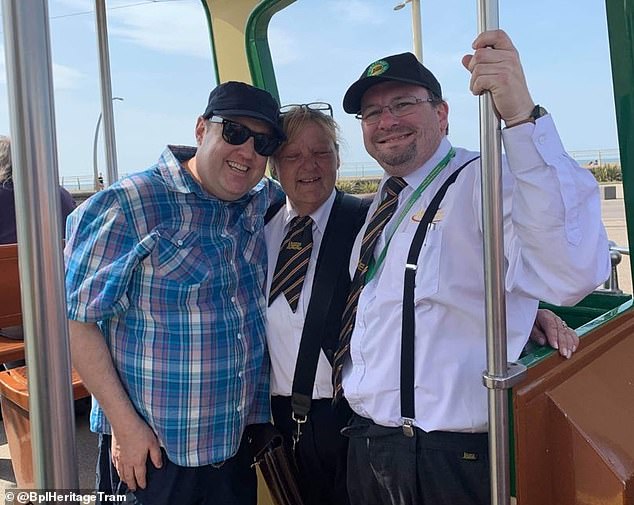 Spotted: Peter Kay was pictured on a tram in Blackpool on Easter Monday – for the first time in a year

Wearing a cap and shades in the snap, members of the tram staff were clearly thrilled to have him aboard, promptly tweeting: ‘We do love a celebrity passenger on our tours, when we can’t get one @PeterKay_co_uk will do instead!

‘He kindly allowed a a photo with the driver and conductor on Boat 600 this afternoon.’

Peter was last seen when he delighted fans at a charity screening for his comedy series Car Share, last April.

The comedian, who cancelled his live tour due to ‘unforeseen family circumstances’ in December 2017, took to the stage at the Winter Gardens in Blackpool, Lancashire and told the audience: ‘Thank you very much for supporting the Lily Foundation raising money for mitochondrial disease.

All aboard: members of the tram staff were clearly thrilled to have him aboard, promptly tweeting, ‘We do love a celebrity passenger on our tours, when we can’t get one @PeterKay_co_uk will do instead’ 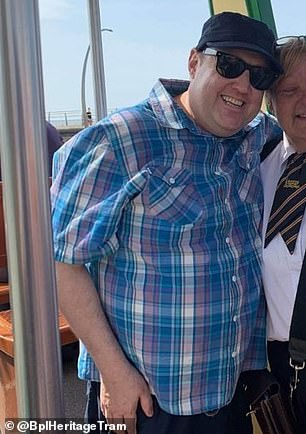 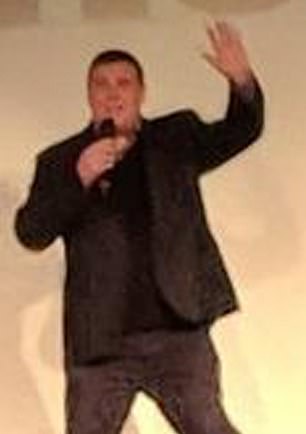 Rare appearance: It’s been a year since Peter Kay was last pictured out and about, seen L on Monday and R last April 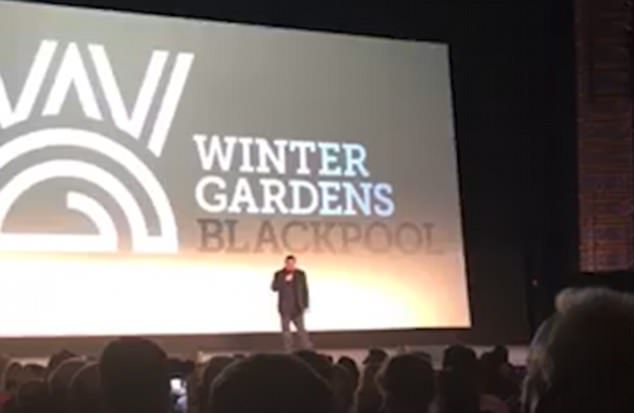 Surprise! Peter shocked fans when he made a rare public appearance at the Blackpool Opera House for the screening of his show Car Share last spring

‘Very kind of you. I appreciate it. Enjoy the last ever episode of Car Share. Don’t tell anyone the end. Or tell anyone about any hedgehogs.’

Bowing as he left the stage, he added: ‘So thank you. Lots of love, enjoy, take care, bye-bye.’

The audience had gathered in Blackpool to see a sneak preview of the final ever episode of Car Share as well as an unscripted version.

The event was held to raise money for The Lily Foundation, which Kay previously described as ‘an inspiring charity’ that helps to improve the lives of children with Mitochondrial Disease.

Comedy fans praised Kay’s performance on Twitter, with users hailing his ‘brilliant’ appearance and others using the opportunity to express relief that rumours of his death were untrue.

Audience member Alison Moore, 45, said Kay appeared on stage after the interval between the episodes to a rapturous welcome.

‘People were shouting out that they loved him, some stood up to clap,’ she said.

‘He just said a few words for a couple of minutes, it was really good to see him. He mentioned the Lily Foundation, the fundraising, and good on him too – it shows what a decent kind of bloke he is.

‘He seemed really fine, relaxed and genuinely touched by the reaction he got. He’s held in such high regard up this way. It was just really good to see him.’

A stream of fans took to Twitter to share their glee at the hit comic’s surprise appearance and praise the final episodes.

One said the Car Share unscripted episode was ‘pure genius’ and added that it was ‘a joy to see Peter on stage tonight’.

‘Absolutely loved it and the man himself stepping on stage abs blew us away #emotional,’ another wrote.

The comic previously announced there would be three charity screenings of his popular BBC comedy programme at the Blackpool venue, each one airing a special finale to the series as well as an entirely improvised episode. 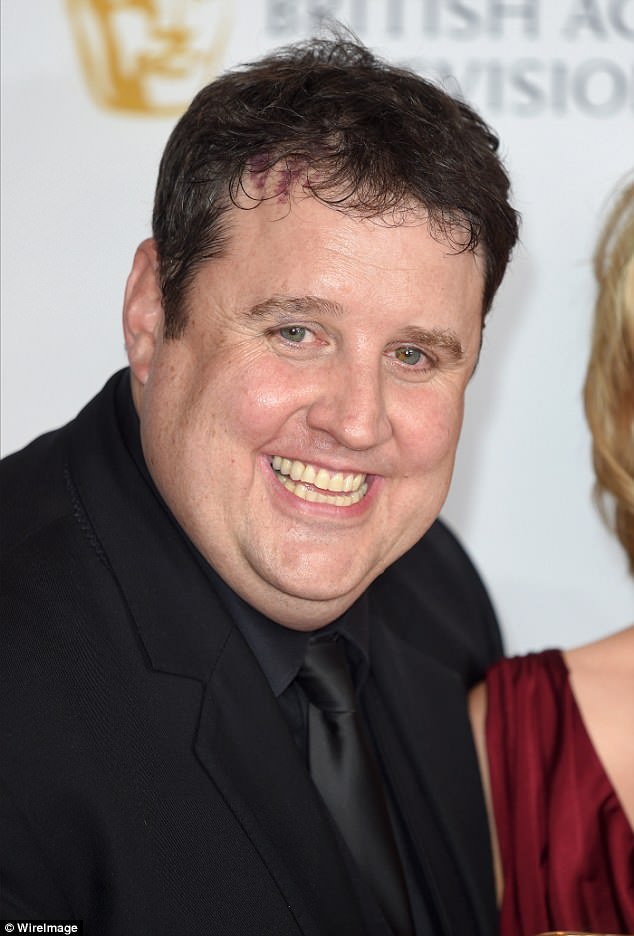 Back where he belongs: Fans at the event said they were left ’emotional’ after watching the comedian take to the stage as he unveiled the final episode as well as an unscripted version

The second series of the BAFTA-winning show ended on an emotional cliffhanger last year as John (Kay) failed to reciprocate the advances of his car share colleague Kayleigh (Sian Gibson).

But viewers were dismayed when he said there were no plans to pen a further series.

The comic later announced special episodes – a special finale to reveal what happens next for the pair and the improvised Car Share: Unscripted. The screenings were initially announced on March 29 2018 in what was the 44-year-old comedian’s first Twitter post since cancelling his live tour months beforehand.

He said in a statement the cancellation was due to ‘unforeseen family circumstances’, adding: ‘This decision has not been taken lightly and I’m sure you’ll understand my family must always come first.’ 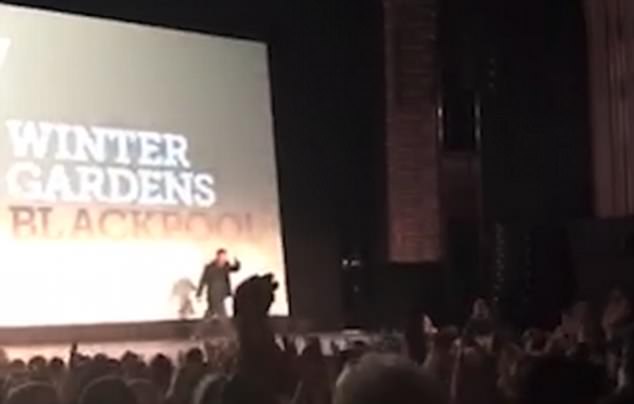 First glimpse: Kay recently announced there would be three charity screenings of his popular BBC comedy programme at the Blackpool venue