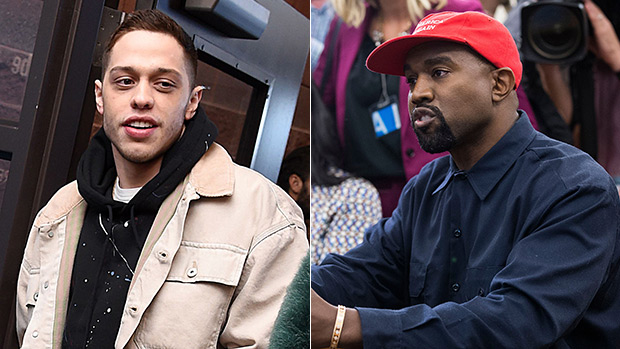 So much for that feud. Kid Cudi celebrated his 35th birthday alongside Kanye West and Pete Davidson, four months after the comedian dragged Ye for his pro-Trump rant on ‘SNL’!

New year, new you, new…friends? Kid Cudi turned 35 on Jan. 30, and to celebrate, the hip-hop star held a dinner at Nobu out in Los Angeles. It was a star-studded affair that included Timothée Chalamet, 23, Kim Kardashian, 38, and Cudi’s Kids See Ghosts collaborator, Kanye West, 41. However, the most eyebrow-raising invitee was Saturday Night Live star Pete Davidson, 25, as the last time he and Ye were in the same room together – Ye’s Sept. 2018 appearance on SNL – it got hella awkward.

However, looking at the pictures Kim and Cudi shared to their Instagram accounts, there was apparently no awkwardness here. The snaps show Cudi, Pete, Ye, and Timothée all having a good time together. One of Kim’s pics captured the four of them laughing, while another casual snap showed them hanging out as if they were just four bros on a Wednesday night. If there was any lingering beef over Pete calling out Kanye for his post-SNL, pro-Donald Trump rant, it apparently had been squashed (or was put aside in honor of Cudi’s birthday.)

Pete responded a week later during the Oct. 6 episode’s “Weekend Update” segment. “Kanye was wearing a MAGA hat,” Pete said, per Rolling Stone. “That’s what’s it called – it’s stupid – and he started by saying people backstage tried to bully him into not wearing it. He wore it all week like nobody told him not to wear it. I wish I bullied you. I wished I suggested that it might upset some people, like your wife or every black person ever.

“Then Kanye said that Democrats broke up black families with welfare and that slavery’s not real,” Pete added. “You know how wrong about politics you need to be for like me to notice? Do you know how annoying that is? Like Kanye is a genius, but a musical genius. Like Joey Chestnut is a hot dog-eating genius, but I don’t want to hear Joey Chestnut’s opinions about things that aren’t hot dog-related.” He then took shots at Kanye being off his meds (“take them!”) before putting on a red “Make Kanye 2006 Again” hat.

It seems that four months later, the two were chill enough to hang out at Kid Cudi’s party. As for why Timothée was there, Cudi tweeted in March 2018 that he was Kid’s favorite artist right now, per Billboard. Seems that sparked a beautiful friendship. See? We can all get along.