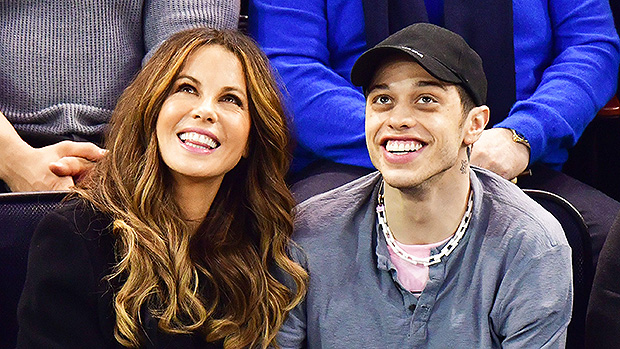 Things are heating up for Pete Davidson and Kate Beckinsale! The hot new couple didn’t shy away from packing on the PDA at the NY Rangers game on March 3. See the kissing pics here!

Kate Beckinsale and Pete Davidson went to a New York Rangers game together on March 3, and things got hot and heavy as they watched the hockey game. The two did NOT shy away from making out right in front of everyone, and photographers were on-hand snapping away. The pair arrived at the game holding hands, and the date came after a late night for the lovebirds in the Big Apple — Pete performed on Saturday Night Live March 2, and Kate joined him after the show for some late night grub at Dos Caminos. They were spotted holding hands on that occasion, as well.

Rumors of a romance between Pete and Kate first began after they were reportedly spotted leaving a Golden Globes party together in January. However, it wasn’t until Feb. 1 that photos first surfaced of the pair together — Kate attended Pete’s comedy show in Los Angeles, and the two left the venue holding hands afterward. Kate has gotten a lot of criticism on social media for her relationship with Pete, and she’s cheekily responded to several haters who’ve slammed her for being with him. Clearly, she’s not worried about Pete’s track record with relationships, and is happy to flaunt their love in public!

In 2018, Pete was famously engaged to Ariana Grande for five months. However, they split in October, just weeks after the death of her ex, Mac Miller. Ariana has been publicly supportive of Pete since the breakup, and even admitted that she thinks the comedian and Kate are “so cute!” together when she was asked about the budding romance.

Before Ariana, Pete was in a long term relationship with Larry David’s daughter, Cazzie David. Meanwhile, Kate was with Michael Sheen from 1995-2003, and they had one daughter, Lily Sheen, 20, together. The two remain close friends. She then met director Len Wiseman while filming Underworld, which Michael also starred in, in 2003. They married in May 2004, but separated 11 years later in Nov. 2015. She filed for divorce in 2016.