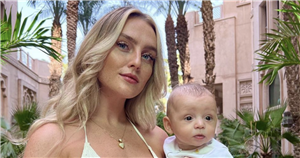 Little Mix star Perrie Edwards has given fans a rare glimpse into her life as she shared a series of rare pictures of her bare baby bump to celebrate one year on from the exciting news.

The 28 year old singer who is currently in a relationship with Liverpool FC player Alex Oxlade-Chamberlain, welcomed the couple’s first child into the world in August 2021.

Little Axel Oxlade-Chamberlain was born in August, with many fans quick to point out how the latest edition to the young family was the spitting image of his father in the weeks that followed his birth.

But it was today’s heartfelt throwback to her pregnancy that had many fans in awe today as Perrie shared Alex’s post of their journey towards parenthood on Instagram.

In the four images, the couple are clearly very much in love as they pose in a combination of smiling and bump focused shots, with two captions accompanying the adorable images.

“So happy to be on this wild journey with my soulmate. Me + Him = You. Can’t wait to meet you baby Ox!,” wrote Perrie.

Meanwhile Alex’s caption read: “Anyone got any advice on how to change nappies? So grateful and excited to become a dad. Bring on the sleepless nights!”

Recently the Little Mix singer revealed she "thought she was going to die" as she prepared to go back on tour with her bandmates just a few short months after giving birth to her baby boy.

Just eight months after the birth she and her pals Jade Thirlwall, 29, and Leigh-Anne Pinnock, 30, hit the road once more as part of their Confetti tour.

With just one week to go ahead of their final performance before going on a hiatus, the group sat down together for an interview with The Sun, where Perrie explained she and Leigh-Anne, who welcomed twins with fiancé Andre Gray last year, had intense "baby brain" during rehearsals.

"I feel like me and Leigh-Anne should have had a note from the doctor saying, ‘Perrie and Leigh have baby brain, go easy on them today’," the blonde beauty shared.

She continued: “Baby brain is real! Jade would pick up the routine in two seconds and we’d be there for an hour doing the simplest of things and then totally forget what it was.

Perrie also went on to praise Jade for helping to keep "morale and positivity up" as without it, she didn't think they would make it in time for the tour start date.

Bandmate Jade was equally in awe of the two mums for being able to "adapt" so quickly after giving birth. She said: “Perrie and Leigh-Anne have had to adapt after having kids and being able to go into full-on rehearsal mode while breastfeeding and having the babies there was so amazing."

For all the latest showbiz stories, sign up for OK! 's daily newsletter here.