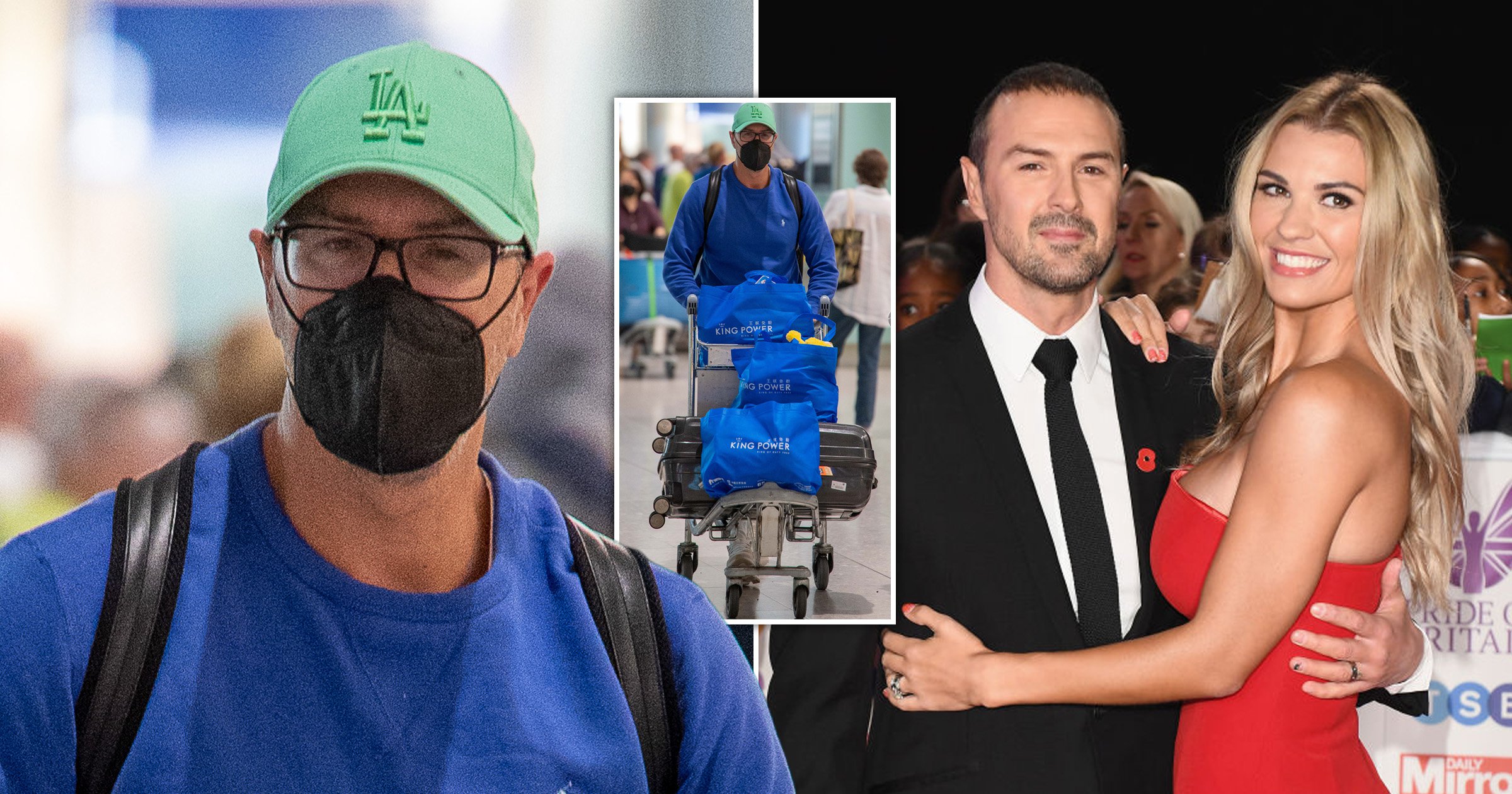 Paddy McGuinness touched down at Heathrow on Sunday night following his wife Christine’s recent admission that they are going through a ‘very, very difficult time’.

The TV presenter jetted in from Thailand where he had been busy filming scenes for the next series of Top Gear with co-star Chris Harris.

He looked sombre as he was spotted pushing his luggage on a trolley through Heathrow, wearing a blue jumper, black face mask and green baseball cap with a rucksack on his back too.

The father-of-three had clearly stocked up on presents for his children – twins Penelope and Leo, nine, and Felicity, six – at duty free as he negotiated several blue reusable bags from Thailand’s King Power retail group, inside which cuddly toys could be seen.

Paddy, 48, had shared his enthusiasm to be back home from filming, sharing a timelapse video of his flight back on Instagram.

He captioned it: ‘I is back baby! 11 hour flight but really enjoyed filming in Thailand, beautiful country.’

‘Yet no matter where I travel it’s always good to get home! Cup of tea, clean bedding and the kids are off skoo. ❤️🎉,’ he added.

His return came a day after 34-year-old Christine gave a new interview, confirming that things aren’t so great between the two of them at the moment.

It came hot on the heels of her denying rumours of a rift after fans thought that Paddy had had his tattoo dedicated to Christine on his ring finger removed., insisting that they were ‘really good, honestly’.

However, she told The Sun in an interview published on Saturday that she feels ‘really quite raw’ and ‘all over the place.’

‘What I might have put up with in the past, I probably wouldn’t put up with now, and the same for him,’ said the former model.

‘I can’t deny we are having a very, very difficult time.’

She continued to allude to there being some wrongdoing on her husband’s end, but didn’t disclose any details.

‘It’s just — we’ve been together 15 years, 11 years married: we are gonna have ups and downs — but this situation at the minute — I don’t want to go into it too much but I will just say that I didn’t cause this situation,’ Christine added.

Christine was also spotted running errands in Cheshire with her car, looking downcast ad she kept her sunglasses on.

Her comments come after the couple seemed to have kept their distance on public outings, with Paddy not showing up to support his wife when she appeared on ITV’s The Games in May, and them both jetting off on separate holidays.

Christine ventured to Croatia for a five-day girls’ holiday, with new pal Chelcee Grimes tagging along after they became friends while shooting The Games together.

Just before her getaway, hubby Paddy flew to Portugal for 10 days with his mates.

In the interview, Christine also shared that she felt couples should ‘expect’ ups and downs in their relationship, especially if you have ‘been together for so long.’

Taking to Instagram to share a photo from the accompanying shoot, she cryptically commented: ‘You will be amazed at what you attract after you start believing in what you deserve 🤍’

Metro.co.uk previously contacted reps for Paddy and Christine for comment.