Survey says … ouch! Chrissy Teigen suffered a painful injury on Sunday, February 17, on the set of Family Feud as she and her relatives battled Vanderpump Rules cast members on the set of the ABC game show.

“I can’t say if we won or lost family feud but we definitely brought a flask, I definitely chipped a tooth and there was definitely a record set,” Teigen, 33, wrote on Instagram on Monday, February 18, captioning a photo of herself laughing.

I can’t say if we won or lost family feud but we definitely brought a flask, I definitely chipped a tooth and there was definitely a record set

I can’t say if we won or lost family feud but we definitely brought a flask, I definitely chipped a tooth and there was definitely a record set

The Lip Sync Battle co-host had teased her and John Legend’s appearance on the show in a tweet on Friday, February 15. “Breaking: john and I are taping family feud against the cast of F–KING @PUMPRULES Sunday!!!!” she wrote at the time. She later commented that she and her husband, 40, would be joined by her mom, Vilailuck Teigen, her sister, Tina Teigen, and one of John’s brothers.

Ariana Madix Opens a New Window. was one of the first Vanderpump Rules stars to rave about the showdown. “MY FAVORITE SHOW WITH MY FAVORITE PEOPLE,” she tweeted.

The Teigen family practiced answering Family Feud questions later on Friday, and Chrissy filmed the dry run for a Twitter video. A question about stargazing stumped the fam, however. “Oh, my God. We’re f–king f–ked,” Chrissy bemoaned in the clip.

On the day of the taping, Maloney recorded a birthday greeting for Vanderpump Rules costar Kristen Doute from herself, Chrissy and Legend backstage. After Legend serenaded Doute, 36, with a few bars from the Bravo reality show’s theme song, Teigen trolled the impromptu performance. “It could have been better,” she said. 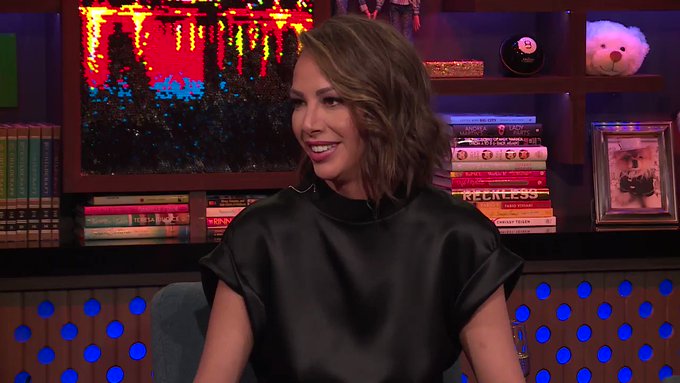 This use may include analytics, personalization, and ads.

Chrissy has shared her injuries with her social media followers before. In September 2018, she showed off bruises on her leg in a Twitter video Opens a New Window. . “F–k, I just fell down the stars,” she said in the clip. “It’s Emmys tomorrow.”

And in April 2017, the cookbook author posted a Twitter photo of a massive bruise on her thigh. “I now do stunts,” she wrote at the time. “#lipsyncbattlescar #iflew !”