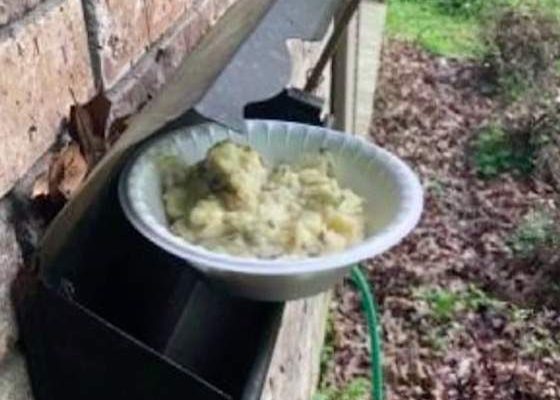 This is a delicious mystery! HuffPo reports that a mysterious someone is leaving bowls of mashed potatoes on people’s “cars, porches and mailboxes” in Jackson, Mississippi’s Bellhaven neighborhood. Pardon me while I call a barge to move my all my shit down the mighty Mississippi River to live in Bellhaven. Free mashed potatoes? That’s the promised land!

Bellhaven sounds like it was a rad place to live even before the Mysterious Mashed Potato Phantom started leaving bowls of delicious on people’s property.

Resident Jordan Lewis described the Belhaven neighborhood as a quirky one, with residents decorating road signs and putting Christmas trees in potholes.

“So we don’t know if someone is just playing a prank or if someone just had a lot of leftovers,” Lewis said.

Other residents are a little more paranoid than Ms. Lewis. Some think that there’s a serial poisoner out there trying to off the local wildlife population (and me if I move there). One resident expressed his dark thoughts about the mashed goodness maybe being a menace.

“Some people were thinking maybe the mashed potatoes were poisoned to kill animals,” he said, noting that he almost stepped into a bowl of potatoes Tuesday. “I didn’t taste it. I have a three-second rule, so I didn’t touch it. But some people were worried.”

Ugh, hopefully not. What kind of asshole would use mashed potatoes for evil? The people of Bellhaven haven’t called the cops yet. So the Mysterious Mashed Potato Phantom is still out there doing God’s work. Seriously, the cost of living is probably cheaper in Mississippi, right? Then again, I live in Boston. The cost of moving to and living in Dubai is probably cheaper than living in Boston.