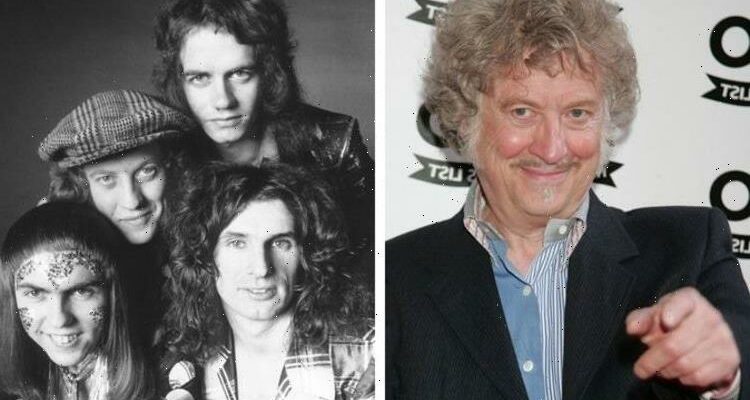 For Noddy Holder of Slade, it’s Christmas all year round, as “not a day goes by without someone shouting ‘It’s Chrissstmas!’ at me at the top of their voice”. However he has now revealed the secret that few knew – that he and Jim Lea are the top earners from track, Merry Xmas Everybody.

People associate me with Christmas, like I’m Santa’s little helper

“All four of the original Slade [members] share performing rights,” he revealed. “But it just happens that Jim and me were the main writers, so we earn more.”

Slade hit the glam rock scene in the mid 60s and by the time Merry Xmas Everybody was released, their line-up consisted of Noddy as lead singer and guitarist, Dave Hill as guitarist and vocalist, Jim Lea on bass, keyboards, violin and vocals and Don Powell on drums.

Since the 1973 release of the unbelievably catchy Merry Xmas Everybody, the song has charted consistently each Christmas.

It has hit the charts every festive season since 2006 and now shows no sign of dropping out.

“Everybody wants to know how much money we make!” Noddy laughed in a new interview with The Guardian.

However he has refused to divulge a figure, claiming that the amount is different each year.

“There’s been all sorts of cover versions, from the Spice Girls, Tony Christie and Oasis,” he added. “[And] some years it’s used in an ad or a movie.”

Some sources have speculated that the annual earnings Noddy receives from the track could be in excess of £1 million, but he refuses to be drawn , simply describing it as “a nice pension plan”.

It first came to fruition after an enquiry from band member Jim’s mother-in-law.

One evening she asked incredulously: “How come that you’ve never written a song that could played every year for a birthday, Christmas or Valentine’s Day?”

“The first song I’d ever written, in 1967, was this hippy, psychedelic song called Buy Me a Rocking Chair to Watch the World Go By, but the rest of the band said it was rubbish,” he elaborated.

“Jim had this melody knocking around, so he put my hook and chorus into his verse and played it to me round his house.”

Then after a night of drinking at a jazz pub, despite it being the height of summer and nowhere near the Christmas season, he returned to his old bedroom in his parents’ house “rather merry” and wrote the lyrics in one sitting.

However the track came to life at the start of a particularly dark time for Slade.

Four days later, the band’s drummer, Don Powell, suffered a near-fatal car crash, which killed his girlfriend and left him on life support for six weeks.

It was on doctors’ orders that “if he’s ever going to play the drums again, he needs to get behind a drumkit as soon as possible”.

Therefore Slade felt obligated, for Don’s own good, to get back into the recording studio and produce what has now become one of the top festive tracks of all time.

“Our manager, Chas Chandler, decided we should head to New York, out of the limelight, to record Merry Xmas Everybody,” he explained.

“People were going about their business with these four mad Englishmen screaming at the top of our voices about Christmas [on] a boiling hot New York summer in August.”

Against his expectations, the track spent six weeks at the top of the British charts.

“People associate me with Christmas, like I’m Santa’s little helper – I’m sure they half expect to see me walking down the street in platform shoes and a top hat shouting ‘It’s Chrissstmass!'” Noddy joked.

“When I’m doing my Christmas shopping, I probably get [someone shouting the lyrics] 40 times a day – but after 50 years, it still makes me smile!”